A nocturnal foraging species that forms nests that can contain more than 1000 individuals.

A member of the mexicanus group of the Myrmecoystus subgenus Myrmecocystus .

Ranging from Creosote bush Scrub in the Lower Sonoran to Upper Sonoran Chaparral; it seems to be most common in Oak-Juniper and Pinon-Juniper Woodlands. The elevational range of navajo is poorly known: in New Mexico it ranges from 4000' to 6100'; in Nevada from 2200' to 6500' and in California from about 700' to 4500'. West of central Arizona the distribution is sporadic, probably limited to suitable habitat elevations in the mountain ranges.

Snelling (1976) - Gregg (1963) found this species in Short Grass Prairie of the Upper Sonoran of Colorado. The type material came from an area of Saltbush-Greasewood Desert near Albuquerque, New Mexico. Creighton (1950), based on information from Wheeler (1908), noted that this "...species makes obscure nests in sandy soil. It does not make a crater but spreads the excavated soil out into a disc." According to Wheeler, too, the colonies are small, of about 100-150 workers.

Some data on foraging activity were reported by Fautin (1946) who studied the species in White Valley, western Utah. Here, the ant was present in the Shadscale and Tetradymia Communities. Fautin found that the sensitivity of the workers to heat seemed to be a factor regulating emergence from the nest: "During April they became active just before dark and the time of their activity was progressively delayed until a later hour of the night as the summer temperatures became higher. By midsummer they failed to emerge until near midnight."

The foraging activities are nocturnal, as usual in this subgenus, and the species solicits aphids and pseudococcids for honeydew as well as foraging nectar directly from plants. Workers may be attracted to sweet baits. Dead arthropods are also collected. Wheeler (1908) reported that he found no repletes in the twenty-two nests which he examined in the vicinity of Albuquerque. Creighton (1950) surmised that repletes undoubtedly are developed. A part of the series from Ft. Stockton, Texas, consists of repletes, and I took repletes from a nest studied at Texas Canyon, Arizona. Although it is possible that the colonies examined by Wheeler may all have been young colonies, I think it more likely that excavation was not complete. Mature colonies number over 1000 individuals, not 100-150.

Wheeler also commented on the lack of a tumulus about the nest entrance. It may be that the nests which he studied were without tumuli due to wind and/or rain action. All the nests which I have seen possess well developed crateriform tumuli composed of coarse grains of sand or fine pebbles.

Little is known of the activities of the sexual forms. Alate females have been taken most commonly at lights. One collection of females made near Scissors Crossing, Calif., on 4 Aug. 1974 bears the note "crepuscular following heavy rain." The enlarged ocelli of the female suggest that mating flights regularly take place during evening or at night.

Mackay and Mackay (2002) - Chihuahuan Desert, sagebrush and grasslands up to oak and pinyon juniper woodlands. These ants nest in the soil with the entrance surrounded by a low mound of soil. Wheeler (1908) reports that the colonies are small, 100 - 150 workers, although this estimate is probably low as was suggested by Snelling (1976). Larvae occurred in nests in March. Foraging occurs primarily at night, with the workers tending Homoptera and feeding on flower nectar. Dead arthropods are also collected.

The node of the petiole of navajo workers is usually thinner and with fewer erect hairs than that of mexicanus, as noted by Creighton (1950) and Gregg (1963). The differences, however, require comparison and will not always hold up in material from California where some workers of mexicanus have narrower and less pilose petiolar nodes. Creighton also commented on the high placement of the eye of navajo, its upper border coincident with the occipital angles. This is not always true, even in material from New Mexico. Also, this characteristic occurs in some samples of mexicanus.

Populations from Nevada and California differ from those of the eastern parts of the range of the species. In the female and worker castes of these western samples the pubescence of head, thorax and gaster is very sparse and the integument is quite shiny. Specimens from the eastern parts of the range are more pubescent and therefore appear less shiny. Erect hairs are also a little more abundant, especially on the thorax, in the samples from Colorado, New Mexico and Arizona. The few samples available from Utah seem to be of an intermediate character. Some are fully as pubescent as the eastern samples; others are more like those of Nevada and California. Many, however, cannot be assigned to one or the other. Since both extremes, as well as the intermediates, may be present in the same nest sample, it is safe to assume that we are dealing with a single, variable species. This reduction in vestiture. in western samples parallels the situation in the related mexicanus 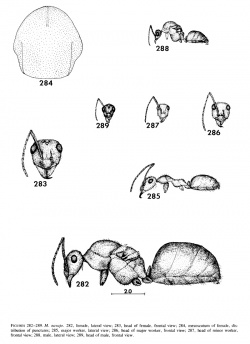 Pubescence very sparse or absent from all surfaces in some small workers, a little more abundant on pleura and propodeum.

Petiole: In profile, compressed, crest sharp; from behind, crest with narrow, shallow median notch; from above, about twice wider than long.

Petiole: In profile, distinctly higher than long, sharply cuneate; in frontal view, sides distinctly convergent above, with narrow median notch; from above, about twice wider than long.

Pubescence sparse on head and thorax, a little denser on frons and propodeum; longer and denser on first two terga.