During summer Myrmecocystus tenuinodis aestivates in order to cope with the high temperatures of the desert.

In the female the mesoscutum is impunctate in the middle, by which it may immediately be separated from those of Myrmecocystus creightoni and Myrmecocystus colei. The distinctly clavate fourth segment of the maxillary palp will separate the female from that of all species except Myrmecocystus hammettensis, but in that species the upper half of the mesopleura is polished between scattered coarse, somewhat elongate punctures and the scutellum has extensive areas of very sparse punctation. The summit of the first tergum, in the middle, and the disc of the second are moderately shiny and uniformly, closely micropunctate in Myrmecocystus tenuinodis, but polished and very sparsely punctate in hammettensis. (Snelling 1976)

Nests are surmounted by low craters up to 20 cm in diameter and are located in areas of fine sand.

Foraging is both matinal and crepuscular. The foragers have been taken at nectaries of Coldenia sp. (Boraginaceae) near Yuma and on Malacothrix sp. (Asteraceaes) at the type locality. They seem to limit their activities to low vegetation, none having been taken more than one meter above ground level. At Yuma, also, workers were seen carrying immature cicadellids (mostly first or second instar) back to the nest. Arthropod fragments are commonly found in the debris around the nest. Repletes have been taken from nests at the type locality.

Creighton took females of this species in flight on 16 Feb. 1963, after a recent rain which soaked the surface to a depth of about six inches. His notes do not indicate time of day of the flights.

Near Thousand Palms I found foraging files of this ant. On both occasions, the files were irregular, with ants well-spaced, and often running parallel with, but about a centimeter to either side of the path. Surface activity by this ant is largely during the spring and autumnal months. There apparently is little or no foraging done between the middle of May and the middle of October. Marked nests located near Thousand Palms which were visited during this period were always closed and the tumuli in disrepair. Summer-long aestivation may be normal for this and other hot desert species. 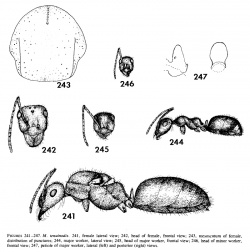 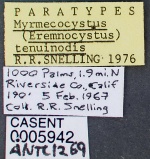 Tenuis (L., thin) + nodus (L., knot), because of the thin petiolar node as viewed in profile.