Although workers of wheeleri are usually wholly orange-ferruginous there are some samples in which legs and the apical gastric segments may be brownish, especially in minor workers. Such specimens are common in material collected at Little Rock Dam. Since the basal gastric segments may be yellowish in occasional specimens of Myrmecocystus flaviceps and Myrmecocystus kennedyi, and are normally so colored in Myrmecocystus kathjuli, other means of separation must be used. The presence of abundant pubescence on the third tergum will immediately separate Myrmecocystus wheeleri from kennedyi. The occipital and pronotal hairs are much shorter in kennedyi than in wheeleri and the tibial hairs are suberect to erect rather than decumbent.

The resemblance of flaviceps to wheeleri in pilosity is closer, since both possess abundant pubescence on the third tergum. In flaviceps, however, the tibial hairs are suberect to erect, the pronotal hairs do not exceed 0.5 x MOD and the occipital hairs are not equal to EL.

The most closely related species appears to be kathjuli and workers of the two species are very similar in most features. The pronotal hairs are a little longer in wheeleri, about 0.85-0.90 x MOD, than in kathjuli, about 0.60-0.65 x MOD. In the latter species, the sides of the first two terga are brownish and many of the hairs of the tibiae are suberect to erect.

The very broad segments of the maxillary palp and largely ferruginous gaster will immediately separate the female of Myrmecocystus wheeleri from all except Myrmecocystus kathjuli. The frontal lobes are uniformly punctate and the punctures separated by less than a puncture diameter in wheeleri; in kathjuli the punctures are very irregularly spaced, with many interspaces of 1-2 puncture diameters. The summit of the first tergum and the discs of the second and third, are uniformly closely micropunctate in wheeleri females. There are extensive impunctate areas on the first tergum, at least, in the kathjuli females seen.

Although male Myrmecocystus are a monotonously similar lot, offering few distinguishing characteristics, that of wheeleri is the proverbial exception. The ventral lobe of the aedeagus, instead of being strongly convex and finely serrate, as in all other species, is concave and coarsely serrate. Otherwise, this sex is very similar to that of kathjuli but with shorter body hairs.

Snelling (1976) - This ant has been collected near sea level (Pt. Lorna) to about 4000 feet in the San Jacinto Mts. It ranges from arid and semiarid regions of the San Joaquin Valley southward in dry coastal canyons and inland valleys and enters the western margins of the Mojave and Colorado Deserts.

Mallis (1940) described the crateriform tumulus to be about 5 in. diameter, with a single entrance about 0.5 in. diameter, but noted that two days later the same nest had two entrances about 1 in. apart. His observations were made near Bakersfield; the ants were seen to forage at midday and to move rapidly over the sand.

The Wheelers (1973) found that one nest which they observed in Deep Canyon was in exposed sandy soil and surmounted by a "shallow irregular earthworks 9 x 13 inches" with "... several irregular entrances ..." Exoskeletal fragments of arthropods, mostly ants, were in the refuse pile.

A worker was seen by Mallis (1940) bringing the abdomen of a honey bee to the nest. Arthropod remnants are abundant in the refuse piles of Myrmecocystus wheeleri, as already noted by the Wheelers. Head capsules of other ant species are often abundant, especially those of Pogonomyrmex, other Myrmecocystus and Formica. Since I've never seen wheeleri attacking other ants, these may be the result of scavenging, rather than predation. Live insects are regularly taken, especially immature cicadellids and small Lepidoptera larvae.

Foraging workers of this ant regularly visit flowers for nectar; they seem to be especially prone to visit species of Eriogonum (Polygonaceae) and prostrate Euphorbia (Euphorbiaceae). Although I have never found repletes in any of the nests I have studied, there is one replete in the material collected by P. Leonard at Pt. Lorna.

Nest founding females have been found in Chaparral areas of southern California in early March after warm rains. The presence of alates in the nests in summer months (6 June and 15 Aug.) suggests that this species also takes advantage of summer and autumnal rains for mating flights. 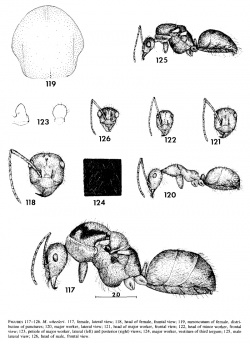 Vestiture: Appressed pubescence sparse, short, on head, denser on occiput and vertex; distinctly longer and denser on thorax, coxae and femora, petiole and first three gastric terga. Pubescence very sparse or absent from fourth and fifth terga. Erect hairs sparse on head, confined mainly to clypeus, frontal area and occiput, those of occiput distinctly longer than EL, of frons and clypeus variable, but mostly shorter than EL; malar area with scattered erect hairs less than 0.5 x EL. Pronotum with 12-18 erect hairs of irregular length, longest about 0.5 x MOD, a variable number of much shorter hairs on neck; mesonotum with about a dozen erect hairs, less than 0.5 x EL; metanotum usually without erect hairs; propodeum with 12 or more erect hairs of variable length, the longest equal to at least 0.5 x EL. Petiolar scale with 6-10 fine, erect short hairs on crest. Discs of gastric segments with sparse erect hairs, about equal to 0.5 x EL, hairs of tergal margins only slightly shorter than EL. Scape with abundant fine, short suberect hairs on inner and lower faces. Inner face of fore femur without erect hairs except along lower margin, these about as long as those of outer face. Middle and hind tibiae with abundant fine, subdecumbent hairs on all surfaces, these a little shorter than minimum thickness of the tibiae.

Color: Orange-ferruginous, often with lower half of face more yellowish; fourth and fifth gastric segments often infuscate. Rarely most of thorax, gaster and legs infuscate in some minors.

Petiole: In profile compressed-cuneate, crest sharp; distinctly notched; from above, about three times wider than long.

Erect hairs present on all parts of face, least abundant on malar area immediately below eyes, and between eyes and ocelli; occipital hairs irregular in length, longest about as long as EL, hairs on frons and clypeus equally variable, but a little shorter. Hairs abundant on thoracic dorsum and sides, highly variable in length, some longer than EL (especially on sides); basal third of propodeum with abundant long hair, apical two-thirds with very short erect hairs, especially toward apex and around gland opening. Crest and sides of petiolar scale with numerous long erect hairs, gastric terga with abundant fully erect hairs on disc, separated by less than their own lengths, mostly about half as long as EL. Fore femur without conspicuous erect hair on inner face. Tibiae with abundant suberect hairs which are about as long as minimum thickness of hind tibia. Scape with abundant suberect, short hairs on outer and lower faces. Forewing without marginal fringe, hind wing fringed on posterior margin.

Petiole: In profile, higher than long, narrowed above, crest convex; in frontal view, evenly convex from side to side, except for vague to prominent median notch; in dorsal view about twice as wide as long.

Vestiture: Erect hairs abundant on body, those of scutellum as long as EL, length elsewhere generally shorter but variable. Erect hairs of hind tibia about as long as thickness of scape. Pubescence sparse on head and thorax, abundant on propodeum and first four terga. Forewing without marginal fringe, hind wing with fringe on posterior margin only.

This ant is dedicated to the late William Morton Wheeler, whose career included the first comprehensive study of these remarkable ants.

Snelling (1976) - This ant has been erroneously identified by Wheeler (1908, 1912) as Emery's Myrmecocystus testaceus. The specimens from Phoenix, Arizona, thought by Wheeler to be transitional between this ant and "semirufus" (i.e., Myrmecocystus kennedyi) are actually Myrmecocystus romainei.