The types were collected from hollow twigs. Gillette et al. (2015) in a Chaipas, Mexico field study of twig-nesting ants in coffee plants found M. mexicana nesting on plants between 1150-1300 m in elevation.

Longino (2006) - The types of M. mexicana were collected in hollow twigs in southern Mexico. A dealate queen at USNM was intercepted by Brownsville quarantine in an orchid stem from the Canal Zone in Panama. At La Selva Biological Station and on the Barva transect in Braulio Carrillo National Park it has been collected in several Project ALAS Malaise and canopy fogging samples, from 50 to 500m elevation.

At La Selva I found a colony in a small dead stem in the crown of a recently felled Carapa guianensis. The relict tree was somewhat isolated in low second growth vegetation, and there were abundant vines over the crown, mainly Marcgraviaceae. The colony was polygynous, with multiple dealate queens. In the field, the tiny workers looked like small Solenopsis or Monomorium floricola.

Head small, convex above and behind, rounded subrectangular, distinctly longer than broad, scarcely broader behind than in front, with rather convex sides and straight posterior borders. Eyes flat, at the middle of the sides. Clypeus moderately convex, almost subcarinate, its rounded anterior border with a small, acute median tooth. Frontal carina: short, straight, parallel, nearly as far apart as their distance from the lateral borders of the head. Mandibles convex, 5-toothed. Scapes of the 10-jointed antenna: reaching half way between the posterior orbits and the rounded posterior corners of the head; first funicular joint fully twice as long as broad; joints 2-6 small, the second as long as broad, 3-6 slightly broader than long; club large, its two basal joints subequal, longer than broad, together nearly as long as the decidedly more swollen terminal joint. Thorax slender, narrower than the head, hour-glass shaped, with the mesoepinotal constriction deep both dorsally and laterally; promesonotum oval, broader •and somewhat larger than the epinotum; mesonotum as long as broad, broader in front than behind; metaepinotal suture distinct, metanotal spiracles large and prominent, epinotum in profile evenly rounded, without differentiated base and declivity, somewhat lower than the promesonotum, the posterior portion of the declivity slightly concave. Petiole small, narrow, much longer than high, with long posterior peduncle; scale thick, strongly inclined forward, the very blunt summit of the scale strongly rounded and entire when seen from behind. Gaster small, elliptical, with pointed tip. Legs slender, only the fore femora slightly enlarged.

Pilosity glistening white, sparse, bristly, erect or suberect on the body; shorter and more abundant on the appendages, erect on the scapes, conspicuous on the funiculi, more oblique on the legs.

Long and slender. Head strongly rectangular, one and one-third times as long as broad, convex above, slightly broader behind than in front, with straight sides and posterior border. Eyes rather large, nearly flat, in front of the middle of the sides; ocelli small, widely separated. Mandibles very convex, with stout teeth. Clypeus convex, with a stout, blunt upturned tooth at the middle of its anterior border. Thorax from above elliptical, nearly two and one-half times as long as broad, somewhat broader than the head; mesonotum flat, subcircular, as long as broad; epinotum small, sloping, scarcely convex in profile, without distinct base and declivity. Petiole as in the worker, but the node with more broadly rounded superior border. Gaster large, elongate elliptical.

Sculpture, pilosity and color as in the worker, except that the mandibles are red and the thorax is deep castaneous throughout.

Longino (2006) - Wheeler’s figure of male genitalia show similarities to Myrmelachista zeledoni, with blunt basiparamere lobe and paramere, and strongly upturned penial valve (suggesting that apodeme meets dorsal margin at right angle, like zeledoni). The volsella is not visible in the illustration, suggesting it is short and downturned, like zeledoni. Pygostyles are not shown, suggesting they are absent or minute. 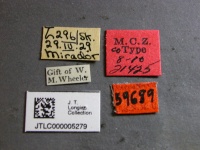 Described from four workers, one female and seven males (No. 296), taken by Dr. Skwarra at Mirador, Vera Cruz in hollow twigs.