Nothing is known of its ecology except that it is found at elevations between 2200 and 3200 meters. Known only from the Thodung region of Nepal.

Radchenko and Elmes (2010) - A member of the ritae complex of the ritae species group. It closely resembles Myrmica indica, but differs by its more stocky body and shorter appendages, by the longer propodeal spines, by the shape of petiole, and especially by its bluntly rounded propodeal lobes.

Queens and males are unknown. 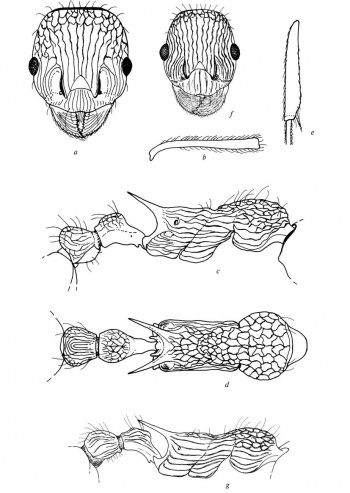 Alitrunk relatively short (here and below — compare to correspondent features of related species, discussed in this paper), with feebly convex promesonotal dorsum (seen in profile), promesonotal suture indistinct (seen from above); metanotal groove distinct, but not very deep; metapleural lobes do not projecting apically, rounded or at most slightly angulated, do not form sharp teeth. Propodeal spines relatively short, widened at the base, straight or slightly curved down and pointed.

Occipital margin with not abundant, quite long suberect hairs, sides of head above eyes without or at most with 1–2 such hairs; alitrunk and waist with sparse long hairs. Scape and tibiae with subdecumbent hairs.

Body reddish-brown to dark brown, appendages somewhat lighter, but not contrasting with the colour of body.

Radchenko and Elmes (2010) - this species was dedicated to our friend and colleague, the American Dr. Gary Alpert of Harvard University, USA, who gave us Myrmica samples that he collected in Nepal and elsewhere.