This species builds nests in the soil, sometimes under stones, in high mountain meadows, cleared fir forests and forest edges. The colony containing the holotype was found nesting in soil at a forest edge. The nest was found by following foragers, the entrance was just a 3-4 mm hole with no visible above ground structure. The foraging workers were hard to see, moving relatively slowly and close to the surface of the ground.

The workers and queens of M. jennyae clearly differ from all other known Myrmica species by their extremely wide frons (FI > 0.50). They superficially resemble scabrinodis-group species, such as Myrmica rugulosa, Myrmica gallienii, Myrmica hellenica and Myrmica constricta, by the combination of a wide frons, a feebly curved frontal carinae and a gradually, while quite strongly curved antennal scape. On the other hand, males of M. jennyae have a relatively long scape that is similar to members of the lobicornis-group and is much longer than in any species of the scabrinodis- group. When compared to the lobicornis-group, the strongly curved antennal scape of the female castes of M. jennyae, that is never angular and with no trace of a carina, denticle or lobe, resembles some members of that group (e.g. Myrmica sulcinodis, Myrmica kasczenkoi, Myrmica displicentia, etc.). However, even apart from its extremely wide frons, M. jennyae also well differs from each of these on at least one other character (e.g. size, colour, body sculpture, shape of petiole, etc.). Furthermore, the anterior clypeal margin of M. jennyae is prominent and narrowly rounded medially, while in other members of lobicornis-group it is slightly convex and with at least a shallow notch medially. (Radchenko and Elmes 2010)

Head longer than broad, with weakly convex sides, straight occipital margin, and rounded occipital corners. Anterior clypeal margin prominent, narrowly rounded medially. Frontal carinae very feebly curved, frons extremely wide (the widest among all known Myrmica species, FI > 0.50). Antennal scape relatively short, quite strongly curved at its base, but not angular and with no trace of a carina or lobe. Mandibles with 7-9 teeth.

Alitrunk with weakly convex promesonotal dorsum; promesonotal suture indistinct from above; metanotal groove distinct and quite deep. Propodeal spines wide at base, relatively long, acute and straight, not curving downwards and not divergent (seen from above), projecting backwards at an angle less than 45°. Anterior surface of petiole slightly concave, its node with feebly convex dorsum. Postpetiole somewhat higher than long, subglobular. Spurs on middle and hind tibiae well developed and distinctly pectinate. 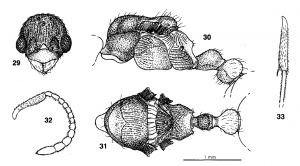 Radchenko and Elmes (2010) - this species was dedicated to Jennifer (Jenny) Elmes, wife of Graham Elmes, who followed foraging workers to find the nest that contained the holotype series.