Radchenko and Elmes (2010) - M. pisarskii is one of the most xerophilous Myrmica species. In Russia, it inhabits steppes and dry meadows, occasionally it can be found in dry and sparse pine forests. It builds nests in soil, often under stones. Michal Woyciechowski took several series from the Altai Mountains, Russia where the nests were found in slightly more humid conditions in moss near a river (though such habitats can become very hot and dry in summer). Woyciechowski also took a number of nest samples from northern Mongolia, all were found living in the soil in meadow dry steppe (1000-1200 m). Here soils were shallow and rocky, trees were absent and the ground flora contained a variety of herbs (see Muehlenberg et. al. 2000). Sexuals are present in nests in July-August, suggesting that nuptial flights occur from late July to early September.

Radchenko and Elmes (2010) - Very similar to Myrmica kasczenkoi by the body sculpture, by shape of alitrunk and petiole, but well differs from it by the presence of a vertical lobe at the scape base. 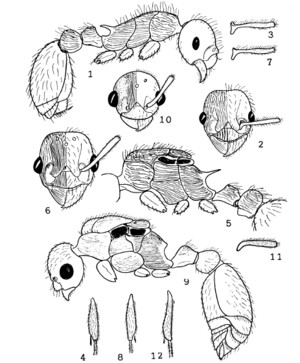 Radchenko and Elmes (2010) - this species was dedicated to the memory of the well known Polish myrmecologist Prof. Bogdan Pisarski (1928-1992), one time Director of the Museum of Institute of Zoology Polish Ac. Sci., Warsaw.