A wide ranging species that occurs in a variety of habitats.

A member of the scabrinodis complex of the scabrinodis species group. M. scabrinodis is so widespread and common that specimens are only given a superficial examination and even when workers are examined more carefully it is easy to confuse M. scabrinodis with several other scabrinodis-group species. Rarer scabrinodis-group species are often identified as M. scabrinodis (sometimes vice-versa) but most commonly workers (and sometimes queens) are confused with those of Myrmica vandeli and Myrmica specioides, and occasionally with sympatric Myrmica sabuleti populations. However, M. scabrinodis males have a much shorter scape than those of M. sabuleti and M. vandeli, and much longer erect hairs on the scape and tibiae than M. specioides, thus if males are taken with the female castes all scabrinodis-group species currently recognised, should be identifiable correctly. Thus M. scabrinodis has always been a “dust-bin” species that includes all forms that cannot be clearly discriminated by a combination of features of all three castes. Even now, we suppose that “M. scabrinodis” includes at least two (perhaps more) cryptic species that are morphologically indistinguishable but have different ecological preferences and are adapted to quite different habitats.

Collingwood (1979) - Yellow red to blackish brown according to habitat. The antennal scape is sharply angled and sinuate near the base, often with a slight lateral extension in the larger more deeply sculptured forms. The petiole has a distinctly concave anterior face which meets the truncate dorsal surface at a sharp angle. Head Index: 85.6; Frons Index: 36.8; Frontal Laminae Index: 66.5. Length: 4.0-5.0 mm.

Throughout Europe. It has been introduced into North America where it is established on a number of the Boston Harbor Islands and possibly the nearby mainland (but occurrence there needs confirmation). It is not known from other locations in North America.

Radchenko and Elmes (2010) - Myrmica scabrinodis uses a wide variety of habitats throughout is extensive range, it is most commonly associated with grasslands but is also present in open forests and woodlands, especially in the southern part of its range. In forests it nests in the soil, often under bark and pieces of wood and sometimes in and under moss. In bogs and marshes M. scabrinodis builds nests in grass and moss tussocks and usually colonies build a quite large solarium from soil, chewed moss and other detritus, where they rear their larvae. In drier grassland and on high moorlands, nests are built under flat stones or directly into the soil, in the latter case small solaria are built in spring but these are not maintained as the season progresses. In very hot conditions nests are built in the soil with no obvious aboveground structures. In many hotter habitats that support a population of Lasius flavus mounds, nests of M. scabrinodis can be found built into the side of the mound and there is some evidence that they prey upon the L. flavus larvae, a view supported by the results of Pontin (1969) who showed that L. flavus produced more sexuals when the nests of M. scabrinodis were removed. M. scabrinodis colonies, like Myrmica rubra, have been shown to amalgamate under some conditions (Morely 1938). A cast of a M. scabrinodis nest on heathland was made by Brian and Downing (1958) and excavation behaviour was studied by Sudd (1971). 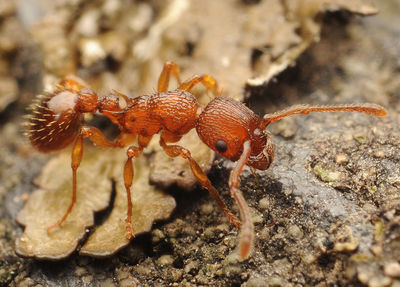 As has been pointed out in the notes above, it is hard to believe that bog-living M. scabrinodis can be the same species as sympatric populations living in very hot, dry grassland. For example, in one study (Elmes et al. 1994) we showed that on sites in both Spain and the Netherlands there appeared to be two distinct "types" of M. scabrinodis that were easily discriminated in the field. “Type I” appeared smaller and paler, lived in wetter conditions, made extensive nests in the vegetation with few if any deep chambers, were more timid being reluctant to run up ones hand if placed in the nest and attacking baits from underneath (like M. lobicornis); “type 2” appeared slightly larger and darker, lived in somewhat drier conditions, made nests with deep chambers in the soil and were more inclined to run up ones hand when placed into the nest, and sat on top of baits (more like M. ruginodis). We also noted similar ecological differences in populations from France and elsewhere in Europe (unpublished).

Subsequently we identified the “type I” specimens from Spain as Myrmica aloba, although these were somewhat smaller than is typical for that species especially compared to populations from Southern Spain and Portugal. Elsewhere, no consistent differences between the two types could be found when dead samples were compared in the laboratory; all the differences seemed to be simply behavioural. Seifert (1984) made a careful morphometric comparison in the context of M. rugulosoides (see above) and Sandor Csosz (pers. comm.) made a similar study using material from a wider range, both found no discernable morphological differences. However, some unpublished preliminary studies made by a Danish Group indicate that such populations have some genetical differences that might be sufficient to indicate cryptic species. In our view M. scabrinodis is undergoing a major speciation event at the current time largely in response to anthropogenically altered habitats (and probably also related species, such as M. aloba). It seems to us that over its range it might comprise several (perhaps four or five) cryptic species and in any region perhaps two or maybe three of these live sympatrically being separated by their behaviour and ecology. The problem is then that if an ecologist in say Britain recognises two ecological forms and another ecologist in say Hungary recognises two ecological forms there is no reason to suppose that the British pair are the same genetically as the Hungarian pair. This is a fascinating problem that cannot be resolved by normal taxonomic study, only by appropriate molecular genetical studies.

On an acid grassland site M. scabrinodis colonies average about 200 workers with 1.4 queens, 30% of nests produced sexuals and these were larger colonies with fewer queens (Elmes and Wardlaw 1982c). Like the sympatric M. sabuleti populations colony size and productivity was related to the above ground vegetation (Elmes and Wardlaw 1982a). In England, colonies on limestone grassland were the largest averaging > 4 queens and about 850 workers per nest, on acid grassland numbers were about 2 queens and 600 workers while high, cold moorland had the smallest colonies, < 0.5 queens and about 300 workers per nest; nest densities were about 1.0, 0.25 and 0.004 nests per m2 respectively (Elmes and Wardlaw 1982b). Genetical relatedness and colony structure was investigated by Seppa (1996).

The mandibular secretions of M. scabrinodis and other ants have been shown to inhibit pollen germination (Sanderson and Wright 1989) and M. scabrinodis have been shown to rob insect prey from Drosera species (Thurn 1989), which may be important for the ants when insect prey is in short supply. The general role of M. scabrinodis in moorland ant communities was studied intensively in Scotland (e.g. Brian and Brian 1951; Brian 1952a, b, 1955b, 1956b), in North Sea sand-dunes (Boomsma and De Vries 1980; Boomsma and Van Loon 1982; Boomsma and Isaaks 1982), in a mountain meadow (Woyciechowski and Miszta 1976), in steppe (Reznikova and Samoshilova 1981) and in relation to Formica ants (Vepsalanen and Savolainen 1990; Dauber and Wolters 2000), but this species has never been subjected to the same intensive study as say, M. rubra and M. ruginodis.

There have been more laboratory studies, comparable with those on the other widespread Myrmica species. For example, pheromones, glandular secretions and cuticular hydrocarbons have been identified (Cammaerts et al. 1978; Morgan et al. 1978, 1979; Elmes et al. 2002), foraging behaviour described (Dlussky et al. 1978; Cammaerts 1980b; De Vroey 1980a, b). Age related polyethism was demonstrated for M. scabrinodis (Weir 1958a, b) and the solicitation behaviour for trophollaxis was described (Lenoir 1972a, b). M. scabrinodis workers and larvae appear physiologically adapted to moderately cool conditions, at any temperature they grow at a rate intermediate between that of M. rubra and M. sabuleti (Elmes and Wardlaw 1983a). This accords to species-differences in basal respiration which vary according to the latitude at which the population lives (Nielsen et al. 1999); respiration of M. scabrinodis larvae were compared with those of Lasius flavus with which it coexists in many habitats (Peakin et al. 1985). While queens of M. scabrinodis suppress the development of large gyne-potential larvae in the same way as other Myrmica species (Elmes and Wardlaw 1983b) some gynes can develop from small over-wintered larvae and so escape queen-control (Elmes and Wardlaw 1981), which might explain why the impact of queen and worker numbers on individual size in natural colonies of M. scabrinodis can not be detected like in the cases of M. rubra and M. sabuleti (Elmes 197 4b). Also, different populations of M. scabrinodis appear more variable in the ability of the workers to oviposit (Wardlaw and Elmes 1998).

Finally, like all the other European Myrmica species nuptial flights take place from late July until the end of September (e.g. Donisthorpe 1934; Boomsma and Leusink 1981; Woyciechowski 1990a; our observations). Very often males and gynes join large mixed mating swarms but we have also observed small very local swarms composed entirely of M. scabrinodis. These local swarms often use a small bush or shrub as a swarm focus.

Collingwood (1979) - The species has variable habits, being found in a very wide range of habitats. In southern areas it is often associated with the meadow ant Lasius flavus (Fabr.) living in part of the mound nest and preying on the L. flavus workers but may be equally common in woodland, coastal sand, gravel river banks, peat bogs and moorland. Individual nests are small, situated under stones, in tree stumps or in the ground with a few hundred workers and one or a few queens. The alatas fly in August, pairing occurring in the air.

Myrmica scabrinodis is the only Myrmica species to be recorded as the host of all recognised European species of socially parasitic Maculinea butterflies and is one of the major hosts of Maculinea alcon and Maculinea teleius (Tartally et al., 2019; Ebsen et al., 2019).

Radchenko and Elmes (2010) - We studied the type series of M. scabrinodis, preserved in the Nylander's collection (Helsinki) and designated the worker as the lectotype (see material examined). Originally, the lectotype worker was pinned through its gaster by a thin and blunt pin; during our investigation the specimen fell from this pin so we glued the lectotype to a cardboard triangle on a proper entomological pin.

Csosz (2012) - Bolton (1988) reported that the holotype might have been a developmentally abnormal specimen, avoiding any further speculations. According to the images (Figs. 1a, b) probably two or three nematode worms (confirmed by nematologists, Gábor Majoros and George Poinar) nearly completely fill in the gaster of the type individual. The worms are not completely developed; these parasites apparently did not attain the preadult stage. In general characteristics of external morphology the Myrmica symbiotica holotype specimen is reminiscent of the workers or mermithogenic phenotypes of M. scabrinodis, hence I conducted a PCA based morphometric comparison of the type with both infested and uninfected classes of M. scabrinodis. Results demonstrate that M. symbiotica holotype is nested in the cluster of infested M. scabrinodis individuals (Fig. 2). Based on these results I propose new junior synonymy with M. scabrinodis.

Radchenko and Elmes (2010) - from a combination of the Latin words scabres = roughness or "scabby" and nodus = knot or lump, to describe the rough, scabby appearance of the surfaces of the petiole.