M. tulinae lives in a quite wide range of altitudes, from about sea level up to 1800 m, were it inhabits moderately humid sites or even wet and boggy places, but never lives in dry habitats (Elmes et al. 2002; Radchenko et al. 2003).

Radchenko and Elmes (2010) – A member of the scabrinodis complex of the scabrinodis species group. The female castes of M. tulinae most resemble those of Myrmica sabuleti and are barely distinguishable from them. In contrast, males of M. tulinae well differ from those of M. sabuleti by their much shorter scape (SI1 < 0.40 vs. > 0.50), but by the length of the scape and by the character of pilosity on the scape and tibiae they are very similar to Myrmica scabrinodis males and could easily be confused with them if found without female castes. Thus, one needs both workers and males to be sure of correct identification of M. tulinae (see also Elmes et al. 2002).

Turkey, Georgia, France, Italy, Netherlands and Poland. Because based only on the female castes M. tulinae can be confused with M. sabuleti, this species in fact may be widespread in Euro-Caucasian region.

Elmes et al. (2002) - The four colonies from Thrace (which provided the holotype) collected in 1999, were nesting in damp, coarse-sandy soil in a small plantation (Populus sp.), where they made raised mounds (ca. 20 cm diameter and 10 cm high). The earlier Thracian samples were taken from Oak forest and Ulmus-Fraxinus forest. Those from NE Turkey were living under stones in alpine meadow. The general impression of M. tulinae nests is similar to those of Myrmica sabuleti, a species that the females resemble morphologically. However, M. tulinae appears to prefer slightly damper conditions than M. sabuleti.

Head slightly longer than broad, with weakly convex sides and occipital margin, and rounded occipital corners. Anterior clypeal margin broadly rounded, not prominent and without notch medially. Frontal carinae strongiy curved, frons quite narrow (similar to that of M. sabuleti Meinert). Antenna! scape relatively short, strongly angulate at its base, with quite large horizontal lobe (similar to that of M. sabuleti). Mandibles with 7-9 teeth.

Alitrunk with slightly flattened promesonotal dorsum; promesonotal suture indistinct from above; metanotal groove distinct, wide and deep. Propodeal spines relatively long, acute and straight, not curving downwards, wide at base, not divergent (seen from above), projecting backwards at an angle less than 45°. In profile, anterior surface of petiole concave, meets with dorsal surface at an angle about 90°; dorsal surface flattened, inclined posteriorly, forming distinct plate. Postpetiole somewhat shorter than high, with convex dorsum. Spurs on middle and hind tibiae (at least in part of type series) partly reduced and with reduced pectination.

Hairs of the head margins and alitrunk dorsum abundant, erect to suberect, quite long and slightly curved; antennal scape with suberect and tibiae with short subdecumbent hairs.

Generally like workers in shape of head, character of sculpture, colour and pilosity of the body except they have a relatively slightly wider head (compare indices in Tables 2a and 2b), slightly coarser sculpture, a more or less straight anterior surface of the petiole, and propodeal spines that are wider at their base. 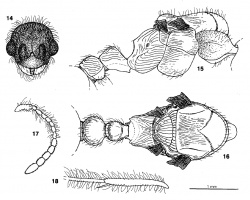