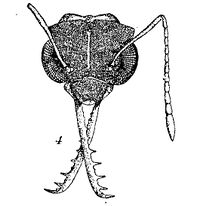 Zettel & Sorger (2011) - Myrmoteras mcarthuri is similar to Myrmoteras williamsi and has been initially mistaken for this species by the first author. However, close examination of material from Leyte yielded the discovery that in fact it represents a distinct new species. Myrmoteras williamsi was described based on sexuals (two gynes and one male) from Los Baños, Laguna, Luzon Island (Wheeler 1919). Moffett (1985) redescribed gynes (types and additional specimens) from Luzon and Negros and workers from Dumaguete, Negros Island. Although he noted important differences between the material from the two islands, he considered them as conspecific, following Creighton (1930).

Although this compares a gyne with a worker, all characters mentioned do not seem to be morph-related, at least there are no differences in the differential diagnoses of worker and gynes of other species (see Moffett 1985).

Myrmoteras mcarthuri differs from Moffett’s (1985) description of “M. williamsi” workers from Negros, as the latter “have a feeble granulate sculpture on the legs, scapes, and mandibles” which is absent in M. mcarthuri. We suspect that this Negros material will turn out being another undescribed species.

Moffett (1985) - Shape of the trunk in workers distinctive: pronotum and propodeum high and strongly convex; mesothorax relatively depressed. M. williamsi has only been collected in the Philippines. Myrmoteras karnyi (tentatively placed in the donisthorpei group) has a somewhat similarly shaped trunk, but the head and trunk of this species are apparently not strongly granulate (Gregg, 1954).

Both pronotum and propodeum very high and rounded (except declivity of propodeum virtually straight), so that mesonotum appears relatively very depressed. In profile with a wide concavity between metathoracic tubercles and propodeum, but metanotal groove not visible as a conspicuously impressed notch in profile. Petiole with steep to nearly vertical anterior slope; posterior slope less steep, straight but curving gently up to summit.

Head (including frontal area and clypeus), pronotum and propodeum finely and evenly granulate, granules 0.01 to 0.02 mm across, present as well on back of head and laterally beneath eyes, and with traces of granular sculpture beneath head; declivity of propodeum smooth; mesothorax with feeble granulate sculpture, widely separated narrow longitudinal rugae on sides and virtually smooth above; funiculi, mandibles and legs feebly granulate, with the sculpture strongest on the tibiae; petiole and gaster smooth. Pilosity sparse to moderate, with 6 to 18 hairs breaking dorsal margin of trunk when viewed in profile (but specimens in very poor condition and conceivably have lost hairs). Hairs short, rising 0.06 mm on head, trunk and gaster; one to two hairs on or near each metathoracic tubercle and two to three on node of petiole. Head and trunk reddish orange (except clypeus and occiput orange red); petiole same but slightly lighter; gaster brownish or yellowish orange; legs yellowish orange; mandibles and antennae orange yellow.

Zettel & Sorger (2011) - Although Moffett (1985) describes workers from Negros, only sexuals (gynes and males) from Central Luzon belong to M. williamsi without doubt. At the Discover Life website, Alpert et al. (2010) present another record from Camarines Sur in southern Luzon; however, this record should be reconfirmed, since the first author studied males from the same province which did not fully agree with the M. williamsi-male from the type locality.