Nothing is known about the biology of Mystrium eques.

Yoshimura and Fisher (2014) - The worker of Mystrium eques is easily distinguished from those of other Mystrium species by a combination of the following characters: strong and deep longitudinal sculpture on the dorsal and lateral surface of pronotum; anteromedial portion of the clypeus strongly convex anteriorly; and sharper angle between the posterior and dorsal faces of the vertex on the median line. The queen of M. eques is differentiated from other Mystrium queens by having vestigial wings reduced to small appendages with undeveloped wing sclerites (ergatoid), posterior face of the vertex forming approximately a right angle with its dorsal face on the median line, and a strongly convex anterior clypeal margin.

The worker of M. eques is similar to that of Mystrium oberthueri, however, the strongly convex anterior clypeal margin separates M. eques from M. oberthueri, in which the anterior margin of the clypeus is straight.

Mystrium are predators that specialize on capturing large centipedes. The long mandibles appear to be adapted to gripping what can be fast moving centipedes, and hold them in place to allow their being stung in the softer areas between their body segments. Foragers carrying out this task also need to have strong mandibular muscles that combined with their long mandbiles may compromise their efficiency in regards to brood care. Mystrium rogeri exhibits caste polymorphism where large workers appear to be specialized for foraging while smaller workers are adapted to specialize on brood care. Colonies of Mystrium oberthueri have large workers and many small reproductives. The vast majority of the the latter do not mate, do not leave the nest and both care for brood and are active in cleaning their nests. Colony size tends to be small (< 200 workers) and in some species, e.g., Mystrium rogeri, reproduction is based on having a single large queen morph that found nests independantly. In others, intermoph queens exist and colony founding can occur via fission.

Wings vestigial and forming small but distinct appendages. Wing sclerites undeveloped. Posterolateral corner of head strongly expanding posteriorly, expansion relatively weaker than that of workers. Posterior face of vertex forming almost a right angle with dorsal face on median line of head, so that declivity of vertex on lateral part as steep as on median part. Ventral half of vertex sculptured. Eye small but distinct. Ocelli absent. Anterior margin of clypeus distinctly convex with long to short conical setae. Anterolateral portion of head with short spine. Masticatory margin of mandible almost invisible in full-face view. Dorsal surface of mandible on distal portion slightly wider than that on mandibular shaft. Spatulate or narrow spoon-shaped seta present on basal side of each basal denticle on masticatory margin of mandible. First flagellar segment on antenna about 1.0–1.2× length of pedicel. Setae on pronotum distinctly spatulate, widened distally with sharp or blunt apex. Metapleural gland bulla moderately developed, not expanding to dorsum of propodeal spiracle, so that propodeal declivity in lateral view weakly convex and rounded posteriorly on its ventral 1/3. Petiole relatively long in dorsal view, about 1.0–0.8× length of abdominal segment III. 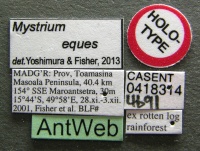 This species name is the Latin word eques, inspired by the distinctly developed clypeus (shield) on the new species. The species epithet is a noun and invariant.