Mystrium are predators that specialize on capturing large centipedes. Mystrium oberthueri is an inhabitant of primary rainforest in Madagascar. Colonies nest mostly in damp rotten wood on the ground, including small branches and root mats. Emigrations are common and may be relatively frequent e.g. when branches decay or dry up. M. oberthueri colonies average 40 adults with typically half being ergatoid queens. The latter are smaller than the workers but only 5% are mated and reproduce. Ergatoid queens do not disperse from their natal nest, and colonies multiply by fission. Virgin queens are specialized in brood care and intranidal tasks, whereas workers focus on foraging and nest defence (Bouchet et al. 2013, Molet et al. 2007a, 2007b, 2009).

The worker of Mystrium oberthueri is easily distinguished from that of other Mystrium species by the combination of the following characters: strong, deep, and thick longitudinal sculpture on the dorsal and lateral surface of pronotum; straight anteromedial margin of the clypeus; a sharper angle between the dorsal and posterior faces of the vertex on the median line of the head. The queen of M. oberthueri is differentiated from other queens of Mystrium species by the vestigial wings reduced to small appendages with undeveloped wing sclerites (ergatoid), the posterior face of the vertex forming approximately a right angle with its dorsal face on the median line of the head, straight anterior clypeal margin (Fig. 22B), and moderately developed clypeal conical setae. The male of M. oberthueri can be separated from the other known Mystrium males by its smooth abdominal tergum VIII, small lateral ocelli situated distant from posterior margin of head in full-face view, and straight dorsal margin of head in full-face view. (Yoshimura and Fisher 2014)

Bouchet et al. (2013) - Our observations show that colony emigration in M. oberthueri is a well-coordinated process. Workers, except for youngest ones, initiate the emigration and perform numerous return trips to recruit nestmates. They also carry brood items, probably lay a chemical trail, and end the emigration by performing more visits to the old nest, probably to check for any remaining nestmates or brood. Queens are also actively involved in the emigration process. First, just like workers, a few non-reproductive queens can be present in the new nest before emigration and thus contribute to the exploration of potential nesting sites. This contrasts with Molet et al . (2007b), who found that queens stayed in the nest. Secondly, queens participate in recruitment (through return trips) and brood transport. Nevertheless, just like young workers, reproductive queens and young non-reproductive queens generally do not perform these tasks, and limit themselves to one direct trip without brood transport. Despite its peculiar caste system, M. oberthueri relocates its nests using a similar pattern of polyethism as monogynous species such as Aphaenogaster senilis (Avargues-Weber & Monnin, 2009). Individuals with experience of the outside world (older workers in M. oberthueri, ‘outside workers’ in A. senilis) are very active. Inexperienced individuals (non-reproductive queens and young individuals in M. oberthueri, ‘inside workers’ in A. senilis) are less involved. Young individuals and reproductive queens preferentially move directly to the new nest, avoiding return trips and brood transport, so they are less exposed to danger. In M. oberthueri colonies, the physiological status of each individual has more impact on its behavioural profile during emigration than its morphological caste.

Although remains of centipede prey have been found inside nests, predation has not been observed directly and may be nocturnal. It is thought that Mystrium ants hunt in group. 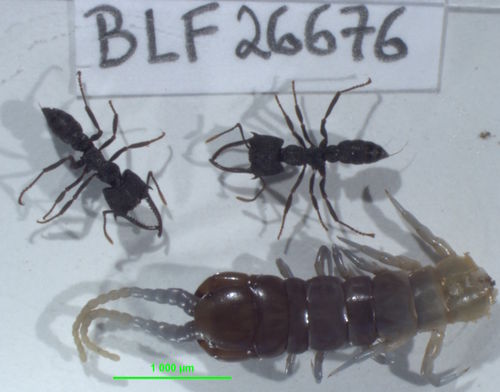 Head part of a Scolopendra centipede found inside a nest, shown next to workers for scale. The complete centipede is estimated to be three times longer. Photo by Christian Peeters.

Queens are ergatoid and mating occurs close to the entrance of their natal nests. Afterwards they return inside. There is no independent colony foundation (Molet et al. 2009). 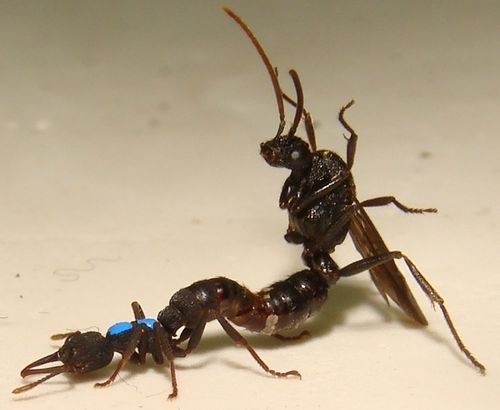 Ergatoid queen mating with a foreign male outside a laboratory nest. Insemination was confirmed by dissecting the spermatheca. Photo by Mathieu Molet.

Wings vestigial and reduced to small but distinct appendages. Wing sclerites undeveloped. Posterolateral corner of head moderately expanding posteriorly, expansion not differentiated from that in workers. Posterior face of vertex forming almost a right angle with dorsal face on median line of head, so that declivity of vertex on lateral part as steep as on median part. Ventral half of vertex sculptured. Eye small but distinct. Ocelli absent. Anterior margin of clypeus almost straight with long to moderate conical setae. Anterolateral portion of head with short spine. Masticatory margin of mandible almost invisible in full-face view, and dorsal surface on distal portion as wide as that on mandibular shaft. Spatulate seta present on basal side of each basal denticle on masticatory margin of mandible. First flagellomere (third antennal segment) long, about 1.2-1.5× length of pedicel (second antennal segment). Setae on pronotum distinctly spatulate, widened distally with sharp or blunt apex. Metapleural gland bulla moderately developed, not expanding dorsally to propodeal spiracle, so that propodeal declivity in lateral view weakly convex and rounded posteriorly on its ventral 1/3. Petiole relatively long in dorsal view, about 0.8× length of abdominal segment III.