One of the rare ant-plant mutualisms involving a ponerine species. N. luteola nests exclusively inside the stems of Cecropia tessmannii trees (Davidson & Fisher 1991, Verhaagh 1994). The plant provides glycogen-rich Müllerian bodies on the petioles of young leaves, and this is the principal food of the ants. In return, workers protect the host plant from herbivores and encroaching vines. The colonies can get exceptionally populous as trees grow taller.

From Mackay and Mackay (2010): The shape of the petiole of N. luteola (thickened as viewed from the side and narrowed anteriorly as in Neoponera crenata as viewed from above) together with the presence of at least a partial malar carina and the form of the subpetiolar process would place N. luteola in the crenata complex. It is easily separated from all of the others in the complex, as the malar carina is only partially formed in the worker (completely formed in the female) and the pronotal margin is weakly developed. The relatively widely separated frontal carinae in the worker and female of N. luteola would separate it from most of the other species of Pachycondyla. The workers are ferrugineous red and the females are a dark chestnut brown, rare colors in Pachycondyla.

Mann (1916) considered R. luteola to be near Neoponera cavinodis. Actually they are very different and would not be confused (see R. cavinodis discussion).

Colonies nest in the hollow stems of live Cecropia trees in Peru (Davidson & Fisher 1991). Because Müllerian bodies contain protein and lipids, Cecropia trees offer their ants a complete diet, making them independent of other nutritional resources. A single polygynous colony can be the exclusive inhabitant of one Cecropia tree 30-35m high, with several tens of thousands of workers (Verhaagh 1994).

During the day wor­kers always patrol over the stem and in lower number over the leaves. At the slightest disturbance they get excited searching the whole surface of the plant for the source of the disturbance. The benefits to the plants seem to consist primarily in a good protection against herbivores, not only insects but also verte­brates, because N. luteola is armed with a powerful sting. This protection against large herbivores is an advantage especially for Cecropia trees that grow slowly in small forest gaps at low light intensities.

Newly mated queens primarily colo­nized only one internode after gnawing through the wall of each internode) ((Verhaagh 1994)). They harvested Müllerian bodies very early and fed them to the young larvae and certainly consumed them themselves Dealate queens were collected in September (Perú). 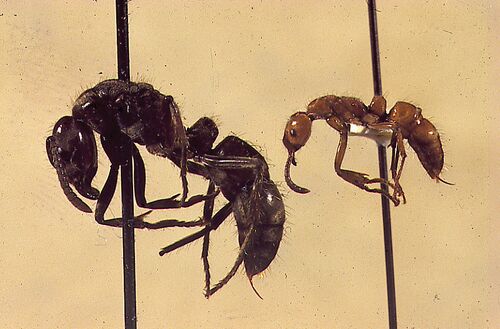 From Mackay and Mackay (2010): The worker is a moderate sized (total length 8 millimeters) ferrugineous red ant. The mandibles have approximately 15 small teeth. The anterior border of the clypeus is broadly convex, the medial lobe is present but poorly developed. The head length is 1.8 mm; the head width 1.5 mm. The malar carina is poorly developed and only evident in about the first ⅓ of its length and does not extend to the eye. The eye is relatively small (maximum diameter 0.37 mm, located slightly more than one diameter from the anterior margin of the head. The scape is relatively short (total length 1.6 mm) and extends slightly past the posterior lateral corner of the head. The sides of the head are weakly convex, the posterior margin is concave. The pronotal shoulder is swollen and barely forms a carina. The mesosoma is depressed at the metanotal suture, but the sculpture is barely interrupted. The propodeal spiracle is slit-shaped. The petiole is thick when viewed in profile with the subpetiolar process well developed, consisting of a blunt ventrally projecting lobe anteriorly followed by a concave region and a broad posterior swollen region. The petiole is narrowed anteriorly when viewed from above, similar in shape to that of N. crenata.

Erect hairs are mostly long (0.6 mm) and abundant on the mandibles, clypeus, dorsal and ventral surfaces of head, scape, mesosoma, petiole and all surfaces of the gaster, the hairs on the legs are similar, but are mostly suberect. Appressed yellow or golden pubescence is abundant on all surfaces. The metasternal process consists of a pair of long slender lobes, unlike those of any other species in the New World.

Most surfaces are moderately to strongly shining and weakly coriaceous.

From Mackay and Mackay (2010): The female (undescribed) is a medium-sized (total length 12 mm) chestnut brown specimen. The head length is 2.3 mm; the head width is 2.15 mm. There are about ten mandibular teeth, most are poorly developed. The anterior border of the clypeus is weakly convex; the head is narrowed anteriorly and the posterior margin is concave. The malar carina is present and extends to the anterior border of the eye; the maximum eye diameter is 0.68 mm. The scape (1.98 mm) extends only slightly past the posterior lateral corner of the head. The pronotal shoulder is swollen but does not form a margin or carina; the propodeal spiracle is slit-shaped. The petiole is thick when viewed in profile; the subpetiolar process has an anterior lobe and a gradually diminishing posterior portion.

Erect hairs are abundant on nearly all surfaces, including the mandibles, clypeus, dorsal and ventral surfaces of the head, posterior margin, sides of the head, scapes, mesosoma, petiole, gaster, the hairs on the legs are mostly suberect, but are abundant and are about as long as the width of the leg. Appressed golden pubescence is present on the head, dorsum and side of the mesosoma, dorsum and side of the petiole and all surfaces of the gaster.

Males are not known for this species.

This species gets its name from the Latin word luteolus, meaning yellowish, referring to the color of the worker. (Mackay and Mackay 2010)