Long thought to exist as two disjunct populations (Florida region in the SE and SW North America), recent findings of this species in Louisiana (Adams et al. 2010) suggests it may have a single contiguous range. 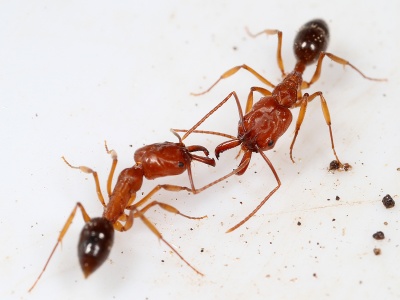 Brown (1976) - A member of the Odontomachus haematodus group. Odontomachus clarus is like Odontomachus insularis, and it also shares with insularis the dark-colored male and 4, 3 palpal segmentation. In fact, the only reliable worker character I can find to separate the two is the different development of the acute apex of the petiolar node. In insularis, the node narrows fairly abruptly (in side view) to a long, thin, backcurved spine, which may occupy a quarter or more of the total height of the node. In O. clarus, the node as seen from the side tapers rapidly to a much shorter spine, which often is not really a spine at all, but simply a sharp conical apex. The shortest and most stumpy nodes tend to occur in small, pale yellowish-brown individuals from the northern limits of the species in Central Texas, and especially in the mountains of southeastern Arizona (Huachuca, Chiricahua and Santa Rita Mountains at altitudes of 1000- 1500 m., for example).

Southwestern North America from Arizona and New Mexico to southern Mexico and a disjunct occurrence in Florida.

Nests are often found under rocks or in grasses associated with both arid and mesic habitats. They have also been located under downed trees in fine sand and gravel soils (Smith 1939, Cokendolpher & Francke 1990, Deyrup and Cover 2004).

A nest found in San Angelo, Texas, during June 2020 by Andrew Graf, was polygynous with 7 dealate queens and about 200 workers. The colony was collected for observation and had 6 queens and 180 workers in August 2020. Two queens behave dominantly and exhibit physogastry at all times. The other queens perform more worker-associated tasks on average. Thus this species appears to follow the observed hierarchy of secondary polygyny seen in other Odontomachus species.

Adams et al. (2010) - "On 11 August 2009 two head capsules were collected in the midden pile of a colony of Dorymyrmex flavus McCookon the road near the Corral Camp area of the Kisatchie National Forest in Central Louisiana (31°31.774’N 093°03.510’W Elev. 323’). The head capsules were missing the recognizable jaws but the converging dorsal furrows on the capsules matched the characters of Odontomachus (Deyrup et al. 1985, Brown 1976). Coloration and head size indicated a species other than the non-native Odontomachus haematodus (Linnaeus), already known to exist in southeastern Louisiana. Presence of the capsules within the midden pile indicate possible predation of Odontomachus by Dorymyrmex. Aggressive interaction between Dorymyrmex bureni (Trager) and O. brunneus has previously been reported by Wild (in Deyrup and Cover 2004). An Odontomachus colony was located on 26 March 2010 in the Kisatchie district of Kisatchie National Forest on the Long Leaf Vista trail (31°28.576’N 092°59.683’W Elev. 238’). Three workers were collected under a rock in sandy soil at the base of a rock bluff. Workers were hand collected and stored in ethanol. Another colony was located on 18 June 2010 near Corral Camp (31°32.105’N 093°03.403’W Elev. 270’) under a large rock next to a rotting stump near the road. The entire colony was collected, including workers and male and female alates. Vouchers are deposited in the Louisiana State Arthropod Museum."

Mackay and Mackay (2002) - Habitat. Semi-desert areas, especially in riparian areas. Biology. This ant nests under stones, and may be locally common, although they are rarely collected. Odontomachus clarus are fascinating predators which snap the elongated mandibles shut on prey. When placed in a vial, they can snap the mandibles together with such force they can flip completely out of the vial.

Cokendolpher and Francke (1990) - In Arizona we have found this species, usually in small numbers, under rocks and grass tussocks, in both dry and mesic sites. In western Texas it shows a preference for more mesic sites and fine soils; nests are usually found under rocks or logs.

Brown (1976) - In Odontomachus clarus, the node as seen from the side tapers rapidly to a much shorter spine, which often is not really a spine at all, but simply a sharp conical apex. The shortest and most stumpy nodes tend to occur in small, pale yellowish-brown individuals from the northern limits of the species in Central Texas, and especially in the mountains of southeastern Arizona (Huachuca, Chiricahua and Santa Rita Mountains at altitudes of 1000- 1500 m., for examples). The mountain samples have been considered as a separate subspecies coninodis, but I see no need to give a formal name to these depauperate ecotypes or ecophenotypes occurring at the upland range boundary of a variable species. Samples from nearby Tucson, taken at lower altitudes in the desert (types of subsp. desertorum) are large, richly colored, and similar to samples of O. clarus from much farther south in Mexico; I do not hesitate to call them conspecific without making further distinction. A transect of collections taken from the Sonoran desert flats up into the mountains should establish clines connecting the lowland and upland forms. Until this transect is properly established, there will of course remain some doubt as to whether the upland form might be a local species. The subspecies clarionensis is based on a worker from Clarion Island, far out in the Pacific of Mexico. This worker proves to be a rather typical specimen of O. clarus, as already indicated by Taylor and Wilson (1961) without comment.