A large (~13 mm) and aggressive arboreal ant that forages nocturnally.

The lone member of the Odontomachus hastatus group.

Posterior third to half of dorsal surface of head smooth and shining; large species (head length including mandibles greater than 2.8mm)...(from Longino Ants of Costa Rica)

Much of what follows is from or is based on Camargo and Oliveira 2012 and Oliveiera et al. 2011. 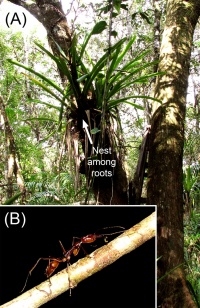 From the abstract of Camargo and Oliveira (2012): This study documents the nesting and foraging ecology of a large (~13 mm total length) arboreal trap–jaw ant, Odontomachus hastatus (Fabricius) in a sandy plain forest on Cardoso Island, off the coast of Southeast Brazil. The results showed that O. hastatus nested in root clusters of epiphytic bromeliads, most commonly Vriesea procera (70% of nest plants). Mature O. hastatus colonies include one to several queens and about 500 workers. Foraging by O. hastatus is primarily nocturnal year–round, with increased foraging activity during the wet/warm season. The foragers hunt singly in the trees, preying on a variety of canopy–dwelling arthropods, with flies, moths, ants, and spiders accounting for > 60% of the prey captured. Although predators often have impacts on prey populations, the ecological importance of O. hastatus remains to be studied.

From the abstract of Oliveira et al. (2011): Queen number per colony is positively correlated with nesting space (root cluster of epiphytic bromeliads), and larger nest sites host larger ant colonies. Plant samplings revealed that suitable nest sites are limited and that nesting space at ant-occupied bromeliads differs in size and height from the general bromeliad community. Dissections revealed that queens in polygynous colonies are inseminated, have developed ovaries, and produce eggs. Behavioral observations showed that reproduction in polygynous colonies is mediated by queen–queen agonistic interactions that include egg cannibalism. Dominant queens usually produced more eggs. Field observations indicate that colonies can be initiated through haplometrosis. 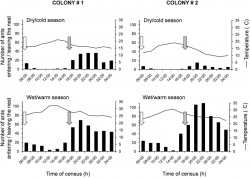 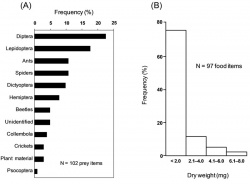 Figure 2. Figure 3. (A) Frequency distribution of different types of prey captured by Odontomachus hastatus foragers, and (B) of their dry weights, in the sandy forest of Cardoso Island, southeast Brazil. Data are based on collections from returning ants of two focal colonies, during the peak of their foraging activity (17:30 to 23:00).

Individual foragers of O. hastatus searched for food usually in the canopy of the tree hosting the nest bromeliad. Hunters frequently used climbing lianas as bridges to go from tree to tree in the forest canopy, or to search for prey on lower plants (Figure 1). O. hastatus was never observed searching for food on the ground.

Foraging activity typically begins at dusk around 17:30 and peaks near 20:00 (Figure 2). At sunset, individual foragers depart from nest bromeliads to hunt for prey among foliage. Typically as the first workers return with newly–captured prey, more ants tend to leave the nest. Foraging ceases at dawn between 06:00 and 08:00. The foraging rhythm is predominantly nocturnal throughout the whole year, with a marked increase in the overall worker activity in the wet/warm compared to the dry/cold season.

From a total of 102 food items registered as part of the diet of two colonies of O. hastatus, canopy–dwelling arthropods comprised the vast majority of the items retrieved by ant foragers in the study area (Figure 3A). The most representative prey groups were dipterans (adults), lepidopterans (larvae and adults), ants (workers and winged forms), and spiders, which together accounted for over 60% of the prey captured. Odontomachus hastatus is a typical generalist predator, with the vast majority of the prey consisting of organisms captured alive (88% of the identified animal items), most of which of dry weight < 2.0 mg (Figure 3B).

Foragers will feed from canned sardines placed on vegetation, and followed back to their nests.

All colonies nested among root clusters of single or clumped epiphytic bromeliads 1.5 to 4.6 m above ground (2.2 ± 1.2 m; N = 45) (see Figure 1). The species of Bromeliaceae most frequently used by O. hastatus for nesting were Vriesea procera (73%; 33/45 nests), followed by Aechmea spp. (13%), and Quesnelia arvensis and Vriesea sp. (7% each). The ants used V. procera opportunistically, since this plant species accounted for 80% of the epiphytic bromeliads sampled in the study area (Oliveira et al. 2011).

Gibernau et al. 2011 - The relationship between ants and Philodendron insigne, a trash-basket epiphyte abundant along streams, was studied in French Guiana. Only a few (3%) of the young plants sheltered ants, whereas 90% of the mature individuals did. The most frequent associate was Odontomachus hastatus, and its nests were almost entirely (94.4%) located in P. insigne root clusters. Experimental choice tests conducted on O. hastatus workers confirmed their preference for P. insigne. We propose that the interactions between P. insigne and ants may be intermediate between non-obligatory, reward-based interactions and obligatory, specific ant–myrmecophyte interactions because (1) almost all mature P. insigne individuals are associated with ants; (2) O. hastatus is the most frequent when diverse ants nest in its root clusters; (3) ants colonize mature P. insigne, but rarely young individuals; (4) ants, particularly O. hastatus, protect the foliage of their host; and (5) at least one ant species, O. hastatus, prefers P. insigne over other host plants. The latter relationship is asymmetrical because P. insigne is inhabited by diverse ants whereas O. hastatus nests almost exclusively in P. insigne.

Our field data with bromeliad-nesting Odontomachus hastatus at Cardoso Island showed that queen number varies widely among colonies and is positively correlated with nesting space (root cluster), and that larger nest sites host larger ant colonies. Samplings of epiphytic bromeliads further showed that suitable nest sites are limited and that ant-occupied plants differ in two traits (size and height of nesting space) from the general bromeliad community. Dissection data revealed that several (if not all) nestmate queens in polygynous colonies of O. hastatus are inseminated, have developed ovaries, and produce eggs. Observations in captivity strongly suggest that egg production per queen in polygynous colonies tends to be lower compared to a solitary queen in a monogynous colony. Indeed behavioral data further confirmed that reproduction is unequally shared in polygynous colonies, and is mediated by stereotyped queen–queen agonistic interactions that may escalate to overt aggression, particularly toward egg-layers, and destruction of newly laid eggs. Those queens with better performances during domination contests usually produced more eggs. While opening the nest plants we found no evidence that dealated queens of O. hastatus were spaced out within root clusters (i.e., located in different cavities), which supports our observations of rival queens sharing the same chambers in captivity and suggests that oligogyny may not occur in this species.

So far we are not certain whether polygyny in this species results from groups of cofounding queens (pleometrosis) or from adoption of newly mated queens by established colonies (secondary polygyny). Indeed both mechanisms can reasonably occur in facultatively polygynous O. hastatus: when nest sites are limited, queen number can increase through a rise in queen adoptions by established colonies (e.g., Herbers, 1986; Hannonen et al., 2004), or through an increase in foundress associations (e.g., D’Ettorre et al., 2005; Feldhaar et al., 2005). In August 2002 we found an incipient colony of O. hastatus with only 3 workers, 6 eggs and a single dealated queen, indicating that this species establishes new colonies through haplometrosis as also reported by Gibernau et al. (2007) in French Guiana. The fact that queen number and colony size (number of workers) were positively correlated in O. hastatus may suggest that inseminated queens are added as the colony ages.

Agonistic interactions among coexisting queens of O. hastatus entailed a series of stereotyped displays ranging from antennation bouts to overt aggression with typical mandibular strikes; the ant initiating the encounter normally won it. An aggressive encounter usually begins with the frontal approach by one queen (dominant) followed by a sequence of vigorous antennal drumming on the head, antennae or legs of the opponent (subordinate). The dominant queen usually stands over the opponent who typically lowers the body, backs the antennae, and closes the mandibles (Fig. 4). The contest may last from a few seconds to 4 min, and typically terminates with the subordinate queen walking away in the opposite direction as the aggressor vigorously antennates its gaster. More rarely, however, the contest may escalate to a true fight and rival queens may lock their mandibles or even pull one another by the antennae, which on one occasion caused mutilation of the appendage. Most queen–queen agonistic interactions occurred near the egg pile, with the subordinate queen typically leaving the surrounding area after the contest. Aggression by queens towards workers was also observed and followed the same behavioral pattern described for queen–queen contests.

Association with other organisms

The syntype worker mentined by Smith was not found. He gives two localities in the original description, Ega and Villa Nova (coll. H.W. Bates). It is assumed that Ega referred to the queen (described first), and Villa Nova to the worker, now lost.