A subgenus of Crematogaster. Blaimer (2012b) revised the Malagasy species in this subgenus, initially dividing its fauna into three species groups. Additional species groups were subsequently added by Hosoishi and Ogata (2016) for some species occurring beyond the Malagasy region.

Blaimer (2012) - The two-subgenera system as proposed follows a deep molecular divergence event between Orthocrema and Crematogaster sensu stricto, tracing back into the Mid-Eocene (ca.40–45 Mya) when these two clades last shared a common ancestor (Blaimer, in press). Recognizing these two groups from each other on a morphological basis is fairly easily achieved, although a diagnosis of the Crematogaster sensu stricto is more problematic given the high morphological variability. An obvious further improvement to the system presented here would have been the recognition of the global Crematogaster clade and the Australo-Asian Crematogaster clade as separate subgeneric entities, as they certainly show enough molecular divergence to justify a three-subgenera-approach. I refrained from such a formal distinction since it was not possible to assign species to these groups on a morphological basis. I primarily aimed to develop a practical, ‘user-friendly’ classification. Petiole and postpetiolar characters that are useful for the distinction of Crematogaster sensu stricto and Orthocrema become hypervariable within the two sensu stricto clades and are not informative at deeper phylogenetic levels. Similar character patterns, for example the presence/absence of a median longitudinal impression on the postpetiole appear to have evolved multiple times within the genus, but the selective pressures acting on morphological evolution in Crematogaster have yet to be revealed. More biological data will need to be collected to investigate these questions.

Hosoishi and Ogata (2016) - Orthocrema ants have generally been considered to be ground dwellers, and they have frequently been collected by general sampling methods in faunal surveys (e.g., Malsch, Rosciszewski & Maschwitz, 2003; Eguchi et al., 2005; Pfeiffer et al., 2011).

Workers of the subgenus are roughly distinguished even in the field, by having a yellow-colored body and acrobatic style. The subgenus has been characterized based on the following features: two-segmented antennal club; petiole with subparallel sides; postpetiole without median sulcus (Santschi, 1918; Emery, 1922; Wheeler, 1922).

In his review of Asian Crematogaster ants, Menozzi (1935) also introduced a chaetotaxy system for the dorsal mesosomal surface among members of the subgenus Orthocrema. Our collections suggest that workers of Asian Orthocrema species generally possess a pattern of rows of long erect setae on the body segments (head, mesosoma, petiole, postpetiole and fourth abdominal tergite), and that chaetotaxy in Asian Orthocrema species is informative for both species-level identification and phylogenetic interpretation. We generally follow Menozzi (1935) and redefine each seta on the mesosoma surface. The chaetotaxy system of Asian Orthocrema species proposed in the present study is summarized in Figure 7 (Menozzi, 1935: fig. 1) and the nomenclature is given in Table 1.

As suggested by Sorger & Zettel (2009), although chaetotaxy is important for species identification, counting setae is often difficult in old or damaged specimens. We therefore did not rely on only the number of setae to distinguish between species.

As in the studies on Tetraponera by Ward (2001), the species richness of Asian Orthocrema is highest in Borneo (10 spp.), followed by Sumatra (7 spp.) and Peninsular Malaysia (6 spp.); indeed, it appears that the Sundaic region is the center of diversity for Asian Orthocrema species.

Hosoishi et al. (2010) revised the subterranean species from the Asian Orthocrema fauna. Crematogaster masukoi and Crematogaster myops have reduced compound eyes (approximately 6–10 ommatidia) and depigmented yellowish bodies. The two species are similar in that they have reduced eyes, but they are quite different from each other in other morphological aspects (Hosoishi et al., 2010). Our cladistic analysis showed that C. masukoi belongs to the C. biroi group, whereas C. myops belongs to the C. quadriruga group, suggesting that their subterranean mode of life evolved independently and is an example of convergence.

Most Orthocrema species are supposed to be general predators. Interestingly, in the subterranean species (C. masukoi and C. myops), their mandibles show different character states from other species. The basal tooth of the mandibles is arranged away from the third apical one in those species, although their teeth on masticatory margin are arranged at an equal distance in most species. Little information is known about the biology of those species, but the unique arrangement of the mandibles may be related to their predatory behaviours (Bolton, 1988).

The subgenus Orthocrema is abundant among Asian ground ant fauna in the temperate to tropical regions. Crematogaster osakensis was one of the most abundant species collected by using Winkler extractions in grasslands of temperate regions, Japan (Hosoishi et al., 2015). Several colonies of C. vieti and C. bandarensis were frequently collected as nest series in northern Vietnam (Eguchi et al., 2005) and Bogor, Indonesia (Ito et al., 2001), respectively.

This species group is easily distinguished by the propodeal spines directed laterally and highly convex postpetiolar dorsum from other Asian Orthocrema species.

This species group is easily distinguished by the short triangle-shaped process on posterior margins of mesonotum and long and abundant standing pilosity from other Asian Orthocrema species.

This species group is easily distinguished by the subpostpetiolar process developed acutely and sculptured surface of mesosoma from other Asian Orthocrema species.

Sculpture smooth and shiny throughout, except metapleuron and anteriormost part of propodeum carinulate; erect pilosity very abundant on head, dorsal side of mesosoma and on metasoma, but finer and shorter than in workers; petiole with 1–3 pair(s) of long flexuous setae posterior to denticles; postpetiole with abundant erect pilosity. Color similar to respective workers, but often metasoma darker.

This species group is unique in having the metanotal groove not covered by lamellate ridges, oval-shaped propodeal spiracles and long and slender petiole from other Asian Orthocrema fauna.

This species group is distinguished by the subpostpetiolar portion wholly convex and smooth and shining surface of mesosoma from other Asian Orthocrema species.

Queen diagnosis of the Crematogaster volamena-group: Large (HW 1.48–1.72, WL 2.61–2.70). With worker characters, except as follows. Masticatory margin of mandibles with 5 teeth. Antennal scapes not surpassing posterior margin of head, reaching to about level of median or lateral ocelli; occipital carinae well pronounced or indistinct; eyes medium-sized to large (OI 0.23–0.27), situated at midline of head in full face view; head wider than long or slightly longer than wide, posterior margin of head straight.

Blaimer (2012): Diagnosis of the subgenus Orthocrema in the Malagasy region 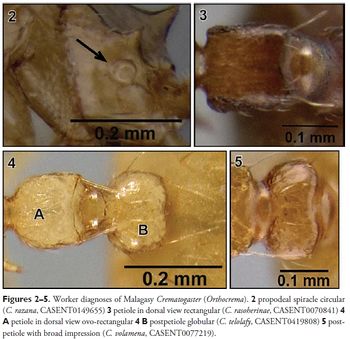 4. Lateral margins of promesonotum with at least 4 long, erect setae.

7. Petiole with dorsoposterior lateral denticles or tubercules that each bear an erect seta (Figures 3 and 4A).

8. Postpetiole either more or less globular (Figure 4B), without median longitudinal impression, or weakly bilobed with a broad impression (Figure 5).

9. Postpetiole with at least one pair of long, dorsoposterior setae (Figure 4B).

A combination of characters 6, 7, 8 and 9 will unequivocally separate workers of Orthocrema species from the remaining Crematogaster species in the Malagasy region. 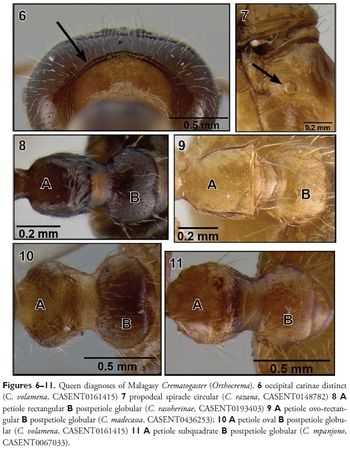 A combination of characters 3, 5 and 6 will unequivocally separate queens of Orthocrema species from the remaining Crematogaster species in the Malagasy region.

Hosoishi and Ogata (2016) - We present the following characteristics for Asian fauna:

1. Mandibles with four teeth on the masticatory margin; the teeth located at equal distance each other in most species, but basal tooth located apart from other teeth in subterranean species (Hosoishi et al., 2010).

20. Nesting in soil; some species nesting in dead twigs on lower vegetation.