This ant has only been found living within Pheidole ant colonies.

Albuquerque and Brandao (2004) - The exclusive character of the workers of O. bruchi is the very elongate anterior portion of the subpetiolar process, compared to the posterior portion, more than twice longer. The gyne runs near those of Oxyepoecus vezenyii in Kempf ’s (1974) key, however it is quite different by the smaller eyes, the pronotum, which is not entirely declivous in the middle, and the relatively small mesonotum in the latter.

The gyne runs near those of Oxyepoecus vezenyii in Kempf ’s (1974) key, however it is quite different by the smaller eyes, the pronotum, which is not entirely declivous in the middle, and the relatively small mesonotum in the latter.

Queens and workers of this species have been found in nests of 3 different Pheidole species (see the nomenclature section for more details). It is not know if Oxyepoecus bruchi can exist as a free-living species or what type of relationship exists between this ant and its Pheidole hosts.

Kempf (1974) - This species was originally proposed on a series of dealate females found in a nest of Pheidole obtusopilosa. Only later, Santschi discovered among alcohol material of the same Pheidole (whether or not from the same colony that had yielded the females, is not stated) the worker, represented by a single specimen which is redescribed above. This specimen confirmed my previous suspicion that minutus Kusnezov (nov. syn.) is its juniors synonym. 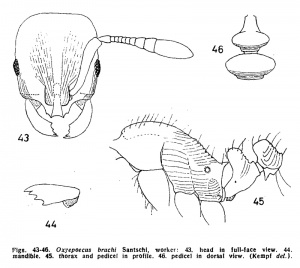 Although the only known queen of vezenyii is remarkably distinct from that of bruchi; it must be said that the more striking differences consist in features (small eyes, a workerlike pronotum which is not entirely declivous in the middle, the relatively small mesonotum, the complete lack of wings) derived from the fact that the former is partly ergatomorphic, in short an ergatogyne. (Wilson, 1971: 138). Aside from these characters based on caste development, the real specific character differences are very subtle and consist, for bruchi, in the shorter, subtriangular mandibles, the more extensively sculptured frons and vertex of head, the costulate patches being only narrowly separate, the narrower petiolar node whose width does not exceed the distance between the tips of the propodeal teeth, the anterior subpostpetiolar process which is unusually prominent and bidentate.

The bruchi queen, according to size and general aspect, is also close to plaumanni, differing principally in the smooth sagittal stripe across the sculptured vertex of head, the extremely feebly developed transverse costulae on basal face of propodeum, the much more antero-posteriorly compressed and laterally expanded petiolar node, the transversely costulate posterior face of postpetiole, and the prominent, bidentate subpostpetiolar process.

The newly proposed synonymy shows that bruchi, as an inquilinous ant, is not host-specific, having been found with both Pheidole obtusopilosa and Pheidole silvestrii, two quite discrepant species. 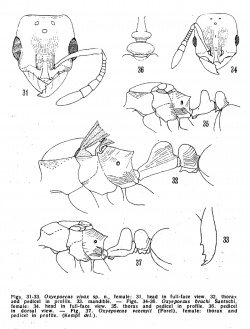 for the following: frons with a narrow smooth stripe separating two patches of fine, longitudinal rugulae which fade out at level of ocelli, not attaining posteriorly the occipital border in full-face view, nor laterally the upper orbit of eyes; cheeks finely costate rugose, rugae attaining anterior orbit of eyes. Pronotum shining, the dorsum finely yet indistinctly and obliquely costulate, the sides smooth. Scutum smooth and shining. Scutellum shining with superficial and weak longitudinal costulae. Basal face of propodeum shining and rather smooth, transverse costulae widely spaced and at best vestigial, practically absent. Upper posterior corner of catepisternum of mesothorax with a few horizontal costulae that continue caudad on sides of metapleura over the bulla of metasternal gland. Hairs abundant, standing on dorsum of thorax, on petiole, potpetiole and on gaster, shorter and inclined on head and appendages.

Head in full-face view with lateral and occipital borders scarcely convex, occipital corners broadly rounded. Mandibles subtriangular; chewing border subequal in length to basal border; basal tooth as strong as subbasal tooth, not separated from the latter by a deep cleft nor by an exceptionally broad diastema. Median apron of clypeus raised and protruding in front, laterally margined by a pair of carinae that converge caudad and terminate cephalad in the form of a prominent pointed tooth, flanked lateraIly by a small and rather blunt denticle. Frontal area impressed, smooth and shining. Frontal carinae mostly subparallel, short, terminating posteriorly at level of anterior orbit of eyes; the distance between their outer edges distinctly less than one third of head width as measured behind eyes. Compound eyes slightly convex, with over 10 facets (11-12) in a row across the greatest diameter of the eye and a total of approximately 50 ommatidia. Ocelly very small, their diameter equalling the minimum thickness of the antennal scapes. The latter, when laid back over the head as much as possible, failing to attain the occipital corner by a distance exceeding their own thickness. Funicular segment I as long as II-V combined; segments II-VII distinctly broader than long, VIII and IX about as broad as long.

Kempf (1974) was not clear on who designated lectotype and paralectotypes, although he cites the specimens as belonging to CTB (Coleção T. Borgmeier), suggesting he was the designator, as Borgmeier collection was incorporated to Kempf’s collection, and as far as we know, Kusnezov has never studied these specimens.