Despite being the most widely distributed species of the genus, Oxyepoecus inquilinus is quite rare. It is considered threatened and is listed as an IUCN vulnerable species.

Workers of O. inquilinus are distinguished by the combination of two characters: the very large compound eyes with about 50 ommatidia, and the developed spines of the propodeum (Albuquerque and Brandao 2004).

O. inquilinus seems to be present both in open and closed habitats, in degraded and pristine ecosystems, and in dry and wet areas. The distribution of this species seems large but discontinuous, and O. inquilinus is apparently locally rare (Delsinne et al. 2011).

Kempf (1974) - The types and subsequent Argentine material (workers only) were invariably discovered in nests of Pheidole radoszkowskii. Yet inquilinus infestation is not common, since it was found only in 2 of 41 radoszkowskii colonies, prior to the description of the former. Placed together in the glass container of an aspirator, Pheidole radoszkowskii soldiers showed themselves very hostile toward the inquilinus workers by endeavoring to cut them up into pieces with their heavy mandibles (Kusnezov, 1952: 718). My own field experience, based on the hitherto known Brazilian material, suggests a similar relationship, inasmuch as several stray inquilinus workers (described under the name of turgidus, a straight synonym of the former species) were collected with Pheidole schwarzmaieri and Pheidole claviscapa workers swarming out of their disturbed nests, at Anápolis, Goiás State. A definite association, however, was not observed in nature (Kempf, 1969: 281).

Delsinne et al. (2011): Oxyepoecus inquilinus was sampled in two localities of the Paraguayan dry Chaco. In the literature, O. inquilinus was reported from two savanna localities of the Brazilian Cerrado, one Brazilian pasture, one anthropogenic area (i.e., the “Jardin del Instituto Miguel Lillo”) from the Argentinean Tucum´an province, and one locality in the Bolivian Beni Department. In addition, one worker closely related to O. inquilinus was collected in a savanna morichal habitat from Colombia, but its specific status awaits further investigation. Finally, O. inquilinus was recently sampled in a Valdivian forest of Chile [5]. If the identity of the Colombian specimen is confirmed, O. inquilinus is the most broadly distributed species of the genus. In fact, its Colombian and Chilean localities represent both the northernmost and southernmost limits of distribution for the entire genus. Although data are insufficient to determine the exact requirements of this species, O. inquilinus seems to be present both in open and closed habitats, in degraded and pristine ecosystems, and in dry and wet areas. The distribution of this species seems large but discontinuous, and O. inquilinus is apparently locally rare, justifying its vulnerable status. O. inquilinus is suspected to be inquiline in Pheidole radozskowskii nests. At T. Enciso N.P., the same Winkler sample collected two workers of O. inquilinus and 11 workers of Ph. radozskowskii. However, at Nueva Asuncion the latter was not recorded in our 60 Winkler and 60 pitfall samples, suggesting that O. inquilinus is not restricted to this host species.

Only known from the worker. 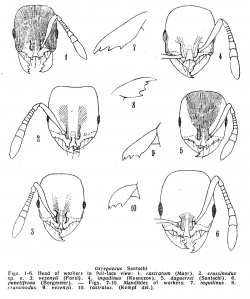 Kempf (1974) - When originally proposed (Kusnezov, 1952: 720), inquilinus was not given any formal description, but only a few, in part worthless differential characters were pointed out both in the text and in the key to the Argentine species of the genus. A direct comparison between the holotypes of inquilinus and turgidus (nov. syn.) proved that both are conspecific, the latter being a straight synonym of the former.

This heavy-set species is striking by its elongate, sublinear mandibles which it shares with Oxyepoecus vivax and to some extent also with Oxyepoecus vezenyii, in which they are already a bit shorter and somewhat variable. Inquilinus differs from vezenyii in the slightly broader head, the more expanded frontal carinae which cover at least one third of the head width, the much larger eyes with over 50 ommatidia, the lack of margination in front and on sides of pronotum, the lack of a humeral angle, the stronger propodeal spines, the dentate, not lobate subpetiolar process.

The worker of vivax is unknown, but to judge from the queen, the shape of the petiole and the postpetiole readily separates both species.

All the Argentine material was found within the nests of Pheidole radoszkowskii Mayr, as already pointed out in the introduction of this paper. For the remaining specimens from Brazil and Bolivia, we have no such evidence.

Note. Three stray males, taken on December 15, 18 and 19, 1957 at Tucumán, Argentina (IML) definitely belong to Oxyepoecus and probably represent the male sex of the present species, inquilinus. They differ from the male of rastratus in the following details: 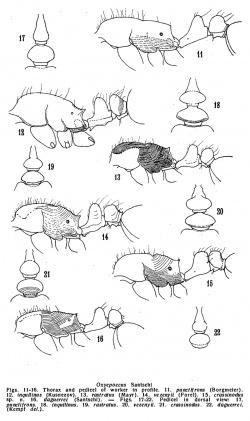 Head. Mandibles sublinear, strikingly elongate, basal border much longer than chewing border, the small basal tooth separated from the stronger subbasal tooth by a broad and shallow diastema. Median apron of clypeus very strongly and sharply carinate on both sides, the anterior teeth and accessory denticles well developed. Frontal area impressed, indistinctly delimited. Frontal carinae short, moderately expanded laterad, terminating at level of anterior orbit of eyes, bearing dorsally a few fine longitudinal costulae which curve obliquely laterad above eyes without reaching them and do not extend caudad beyond level of posterior orbit of eyes; maximum distance between outer edges of frontal carinae at least one third of maximum head width. Cheeks longitudinally striate in front and above eyes. The latter comparatively very large, moderately convex, with about 10 facets in a row across the greatest diameter, the total number of ommatidia being about 50 in all. Antennal scape relatively long but not quite reaching the occipital corner when laid back over the head. Funicular segment I longer than VIII and IX taken individually, as long as II-V combined; segments II-VII visibly broader than long; segments VIII and IX subequal in length, about as long as broad.

Thorax stout and heavy-set. Promesonotum continuously vaulted in both directions, immarginate in front and on sides; shoulders completely rounded, not angular nor subdentate. Metanotal groove scarcely to not at all impressed; no metanotal suture present. Basal face of propodeum transversely costulate, the 10 or more fine costae fading out on sides of propodeum; the last costa between the comparatively prominent and acute propodeal spines separating the basal from the declivous face; the latter smooth and shining, laterally sharply marginate. Metasternal lobes rounded. Sides of thorax on postero-inferior corner with a few strong costulae, curved around the bulla of the metasternal gland; mesopleura also with a narrow band of short, faint, horizontal costulae along the posterior border.

Petiole strongly pedunculate, node high and rounded above, antero-posteriorly compressed, scalelike, nearly as broad as postpetiole; subpetiolar process in the form of a sharp sagittal crest terminating in front in a very prominent tooth. Postpetiole very broad, scalelike, not as high as petiole, its posterior surface with a few faint, transverse costulae. Gaster smooth and shining throughout.