Only known from Brazil.

The present species is closest to the sympatric Oxyepoecus rastratus. The worker exhibits the following diagnostic features: costulae on disc of cephalic dorsum not attaining laterally the upper orbit of eyes nor posteriorly the occipital border in full-face view; eyes smaller, with only 5-6 facets in a row across the greatest diameter and less than 20 ommatidia in all. Petiolar node not compressed nor expanded laterad. The same differences, except the eye character, hold for the females of both species, while plaumanni, in addition, has the mesonotal scutum. entirely smooth and shining.

All the known material comes from Berlesate collections of forest leaf-mold, so nothing is known about the habits of this species, which seems to be confined to the floor cover of Araucaria forests in southern Brazil. Collections were made in in dense evergreen and drier forests.

Males have not been collected 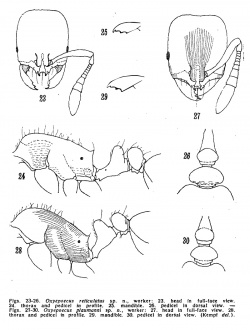 Head. Mandibles subtriangular, not strikingly elongate; basal border subequal in length to chewing border, basal tooth not separated from subbasal by a broad diastema nor by a deep cleft. Median apron of clypeus projecting forward between the two strong, anteriorly diverging carinae, forming anteriorly a pointed prominent tooth, flanked laterally and below by another small denticle. Frontal area impressed, smooth and shining, distinctly delimited. Frontal carinae short; subparallel, terminating at level of anterior orbit of eyes, moderately expanded laterad, the maximum width between their outer edges being less than one third of maximum head width. Frontal carinae, frons, and vertex finely, longitudinally costulate, the sculptured area continuous, not attaining laterally the upper orbit of eyes nor caudally the occiput in full-face view. Cheeks longitudinally striate in front of eyes. The latter comparatively small, very little convex, with about 5 (6) facets in a row across the greatest diameter, the total number of ommatidia not exceeding 20. Antennal scape failing to reach the occipital corner by a distance which exceeds the maximum thickness of scape. Funicular segment I longer than VIII and IX taken individually, as long as II-V combined; segment II-VII decidely broader than long, VIII and IX subequal in length and about as long as broad.

Petiole strongly pedunculate, node high and rounded, not particularly compressed antero-posteriorly nor laterally expanded; subpetiolar process in the form of a small denticle. Postpetiole much broader than petiole, the node proper somewhat compressed antero-posteriorly, its posterior surface without distinct transverse costulae. Gaster smooth and shining above and below, faintly excised at postpetiolar insertion.