One of the better collected species within the genus.

The exclusive character of the workers of O. rastratus in relation to other species in the group is the costulate sculpture between the frontal carinae, which reaches posteriorly the vertexal margin and laterally the compound eyes (Albuquerque and Brandão 2009).

The material taken by Plaumann and by myself is from berlesates of leaf-mold; a colony collected by Lenko at Serra Carac;a, Minas Gerais, was nesting in a decaying log on the forest floor, in the vicinity of Hypoponera iheringi Forel and Brachymyrmex sp. (Kempf 1974).

A Paraguay collection (A. Wild) consisted of: "seven workers and one dealate queen....nest in red rotting log; wood was too hard for a full excavation; one chamber uncovered with gyne and brood. Also "samples in the dry Chaco and in the Parana forest suggests that this species may be present in a variety of biomes" (Delsinne et al. 2012). 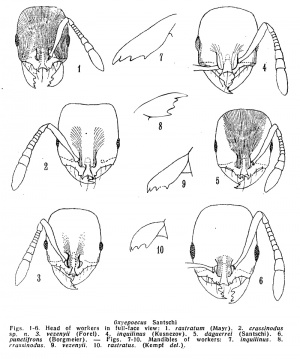 Kempf (1974) - There are only two known species in the genus that share with rastratus the entirely sculptured cephalic dorsum (sculpture attaining laterally the eye and posteriorly the occiput), viz. Oxyepoecus mandibularis and Oxyepoecus reticulatus.

Workers of rastratus differ from those of mandibularis in smaller size, absence of a narrow and deep cleft between the basal and subbasal tooth of mandibles, shorter antennal scapes that decidedly fall short of reaching the occipital corner when in repose, smaller and less bulging eyes, regular and densely costulate sculpture of head and promesonotum, well developed propodeal armature, broadly expanded and antero-posteriorly compressed nodes of petiole and postpetiole.

The characters that separate rastratus workers from the same caste of reticulatus are the following: sculpture of head and promesonotum consisting of regular and dense costulae, with the punctulae either absent or feebly developed; eyes larger, with 7-9 facets in a row across the greatest diameter and over 20 ommatidia in all; antennal scape a trifle longer, its apex removed from the occipital corner by just its own maximum thickness; laterotergite of pronotum smooth and shining; basal face of propodeum sharply and densely transversely costulate; propodeal teeth well developed and protruding; petiolar node scalelike, antero-posteriorly compressed and expanded laterad. In the female caste, more or less the same differences do apply, the queen of rastratus being distinct from that of reticulatus by the head sculpture, larger eyes, smooth and shining laterotergite of pronotum, densely cross-costulate basal face of propodeum, the laterally expanded and antero-posteriorly compressed petiolar node, the absence of short, curved hairs on gaster, and the presence of well-developed wings. 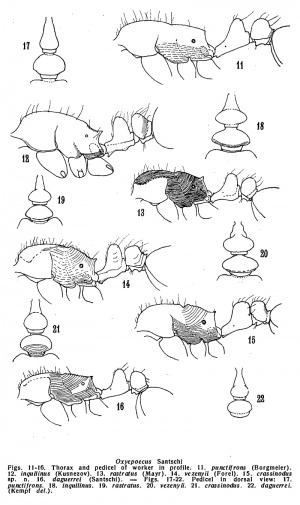 Head. Mandibles short, subtriangular; between basal and subbasal tooth a deep yet broad incision. Posteriorly converging clypeal carinae and anterior teeth well developed, the lateral denticles subobtuse and lobelike. Frontal carinae short, subparallel, terminating at level of anterior orbit of eyes, the distance between their outer edges distinctly less than one third of head width. Eyes intermediate, feebly convex, with 7-9 facets in a row across the greatest diameter which is subequal to the distance between the anterior orbit and the mandibular insertion, total number of ommatidia well over 20. Antennal scape failing to reach occipital corner when laid back over the head by a distance that equals its maximum thickness. Funicular segment I equal to sum of II-V; segments II-VII broader than long, VIII and IX as long as broad.

Petiole and postpetiole. The former strongly pedunculate, with the subpetiolar process in the form of a small tooth; node antero-posteriorly compressed and scalelike, laterally expanded. Postpetiole much broader than long, somewhat compressed antero-posteriorly, the sides drawn out into bulky lobes. Gaster faintly excised at postpetiolar insertion. 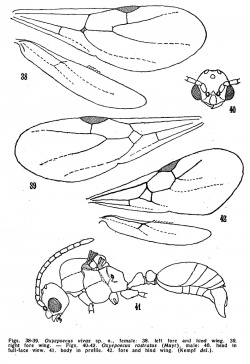 worker with the usual differences of the caste. Eyes larger, the maximum diameter with 11-13 facets in a row exceeds the distance between the anterior orbit and the mandibular insertion; the total number of ommatidia from 60 to 100. Ocelli small, their diameter equal to thinnest cross-section of the antennal scape. Pronotum with marked yet not tuberculate shoulders, entirely declivous in the middle, dorso-laterally obliquely, densely striato-costate. Mesonotal scutum and scutellum finely, densely and regularly longitudinally costulate. Basal face of propodeum transversely costulate, with about 16 costae; sides immarginate; propodeal teeth stout and prominent. Laterotergite of pronotum smooth and shining. Posterior third of mesopleura, the metapleura and sides of propodeum horizontally to obliquely costulate. Wings only slightly infuscated, venation as usual in the genus. The only winged specimen seen has a small discoidal cell, and an extra-vein arising from the junction of r-m with Rs and extending apicad between Rs and M, as shown in the wing of the male.