This ant has been transported to almost all the populated subtropical and tropical areas in the world. It is usually in disturbed areas but can invade undisturbed areas as well. It is a general scavenger and also tends honeydew-producing Homoptera. Nests are in accumulations of dry litter or mulch or under objects on the ground. 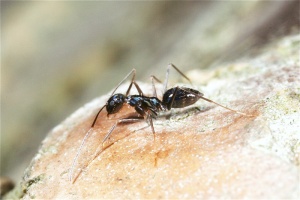 A common tramp ant that has been spread to most of the world's subtropical and tropical areas with substantial human populations.

Sharaf et al. (2017) report on this species in Yemen: The known habitats of this species are diverse, no doubt enabling its wide distribution. We observed Paratrechina longicornis nesting in moist soil under a rock adjacent to a date palm tree. Another nest was collected from dry soil under shrub Frangula alnus Mill. (Rhamnaceae). Many workers were found in leaf litter under a date palm tree where the soil was moist and rich in accumulated sheep and goat faeces. Several workers were foraging in leaf litter on dry soil under an Eragrostis tef (Zucc.) Trotter (Poaceae) tree, where the soil was dry. A nest was observed under a rock in moist, compacted, clay soil. Hundreds of workers were foraging in moist leaf litter and on twigs of a small shrub. Several workers were nesting under a stone in humid soil and next to banana plantations. A nest was found under a rock next to a dragon blood tree, Dracaena cinnabari Balf.f. (Asparagaceae). This species has been reported as a pest in greenhouses in both temperate and tropical regions (Nylander 1856; Motschoulsky 1863).

Bertelsmeier et al. (2015) examined elements of interspecific aggression between this species and several other highly invasive ants. In laboratory assays Paratrechina longicornis was adept at avoiding aggressive interactions. When confronted by workers of other invasive ant species P. longicornis either acted indifferently or moved away.

Florida (USA) - Introduced into Florida and found as far north and west as Leon County, but much commoner in south Florida. Pest status: a minor nuisance in outdoor eating areas, and frequently enters buildings where there is easy access to the outside. First published Florida record: Smith 1930. (Deyrup, Davis & Cover, 2000.)

McCreery et al. (2019) tested movement initiation and obstacle navigation in group foraging. Baits of various sizes were used, with testing conducted in the field in Tempe, Arizona. They found P. longicornis excel at cooperative transport despite wide load variation. The effects of load properties vary across transport challenges, and groups struggling to move large loads may find obstacle navigation easier once a load has begun to be moved.

Jaffe (1993) reported that at low tide on the beaches of Mumbai, India, hundreds of meters of new coast are exposed, filled with marine debris and human detritus. In this area, some 100 m from the high tide line, he found colonies of Paratrechina longicornis nesting in the sand and foraging on the debris around their nest up to 25 m away. Nest density was very high (estimated in over 1 nest/ m2), although as colonies are known to be polydomic and all nests likely formed a single colony. These ants have to hide in their nests at high tide, which probably are protected from flooding thanks to trapped air in their galleries.

LeBrun et al. (2015) found a behaviour, first noted and resulting from interactions between Solenopsis invicta and Nylanderia fulva, that detoxifies fire ant venom is expressed widely across ants in the subfamily Formicinae. This behavior was also studied and shown in experiments with P. longicornis. See the biology section of the N. fulva page for a description of acidopore grooming and the use of formic acid for detoxification of a specific class of venoms that are produced by ants that may interact with formicines in the context of predation and food competition.

Additional images can be found here.