The only species in its genus, nothing is known about the biology of Phaulomyrma javana. It is only known from the male caste.

This genus is to be distinguished from Leptanilla by the presence of wing veins and the unusually large genitalia. (Wheeler and Wheeler 1930)

Known only from the male caste.

Petersen (1968) - This species was described on the basis of two males from Buitenzorg, Java. The authors found it necessary to create a new genus for it, in which they also included Leptanilla tanit from Tunesia.

The reasons for the erection of the new genus are vague. In the paper it is briefly stated that Phaulomyrma is to be distinguished from Leptanilla by the presence of wing veins and the unusually large genitalia. Further it is seen from the description that the tibial spur formula of Phaulomyrma is 1:2:2 rather than 1:1:2 in Leptanilla (also in L. tanit which was included in the new genus), but in all other features of some generic value the two genera are similar.

This also applies to the wing venation which was regarded as distinctive. New investigations on the wings of Leptanilla show that both Leptanilla and Phaulomyrma have the same type of venation in the fore wing; in my opinion the original drawing of the wings of Phaulomyrma javana is not quite correct and a correction would probably give an almost the same venation as found in L. tanit, perhaps not quite as reduced.

However, Phaulomyrma may be retained as a separate genus on the basis of the genital structures if the description and figuring of these are fully correct. The genital capsule of Phaulomyrma javana (figs. 16 A, C) is not unlike that of Leptanilla in the general appearance of the gonocoxites and the inflected gonostyli, but the volsellae are large, plate-like with broadly rounded free margins and without digiti in Phaulomyrma rather than small and probably inflected in Leptanilla and provided with rod-like digiti. There are probably other differences, however, which are not fully recognizable and understandable on the basis of the descriptions and figures alone. 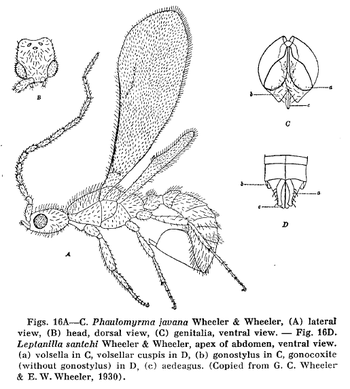 Leptanilla tanit must be included in the genus Leptanilla again. This species has quite normal Leptanilla genitalia, as appears already from the original description, and the results of my examination of type material are confirmative.

Head large, about one-fifth of the entire length, slightly longer than broad, somewhat narrowed behind; the posterior border emarginate.

Antennae thirteen-jointed, half as long as the body; flattened; inserted on the anterior margin of the head; twice as far apart as the distance from the eyes. First segment thickest, one-third as wide as long; second, one-half the length of the first, curved and thickened apically; third, as long as the first; fourth to the thirteenth gradually lengthening until the thirteenth is one-third longer than the first and one-half as wide.

Thorax at its maximum breadth two-thirds the width of the head, compressed into a somewhat cuneiform shape with the thin edge above. Sutures distinct. Pronotum concealed from above. Dorsal profile in lateral view ascending evenly and obliquely, forming an obtuse angle at the middle of the mesoscutellum, depressed at the sutures of the metanotum, which is rounded. Epinotum rounded.

Anterior leg thickened, spur one-half the length of the first tarsal joint; mesothoracic leg shorter and much more slender than the others; meso- and metathoracic tibiae each with two simple spurs, ttind leg reaching just beyond the tip of the abdomen.

Abdomen as wide as the head, one-half the length of the entire insect, and strongly curved so that the sagittae extend forward to the base of the abdomen. Petiole convex below, attenuated anteriorly; posterior third subcylindrical. Node hemispherical.

Hairs abundant except on the genital capsule which is naked; longer on mouth parts and front, and longest on the dorsum of thorax, apex of node, and dorsal tufts on each abdominal segment" more sparse and half as long ventrally. Eyes with numerous very short hairs. Wings conspicuously hairy; the hairs on the surface short, those fringing the margin much longer, decreasing in length toward the base.

Genitalia large and non-retractile. Lamina annularis slightly compressed. Sagittae widened at the base, the apex extending beyond the stipites; the latter hairy, acuminate, slightly curved, and folded within the lamina annularis. Volsellae thin, plate-like, with broadly rounded free margins. The prongs of the bifurcated subgenital lamina slender, one-fourth as long as the genitalia.