They preface details about the species groups with the following:

We provide diagnostic definitions for six species groups based on morphology. Species within these groups share important characteristics in shape and proportions of head and mesosoma, relative length of appendages in general, and scape and metafemur length in particular. These are related to life history traits and ecology of the species (Weiser & Kaspari, 2006). Furthermore, important diagnostic characters include postpetiole proportions and modifications (i.e. ventral and lateral processes), and the overall pattern of body sculpture. The latter is generally variable within species groups and between species, ranging from densely punctate to almost completely smooth and shiny. Nevertheless, intraspecifically the sculpture-patterns are consistent, except for some minor and sporadic differences in the expression among different populations. Pilosity is another good diagnostic character, and is suitable for the division of species into groups with major differences in length, thickness, and overall abundance of hairs. Our species group definitions are provisional and are likely to change when more material is available. Phylogenetic analysis will be necessary to test the monophyly of our groups, but in the mean time they serve a useful function to aid identification and to break the species into clusters for revision.

Currently, 136 valid taxa are listed for the Afrotropical region (Bolton & Alpert, 2009), with the actual number of species being undoubtedly higher. Most of the tropical forests and other species rich habitats remain unsampled, and museum collections already store many undescribed species.

Species with square-like heads in both, minor and major workers, shorter appendages (minor worker SI: 86–115, n=32), often extensive and coarse body sculpture (sometimes only on pronotum), abundant and fine pilosity and small postpetioles, in major workers with a lateral process.

A key to the pulchella group species 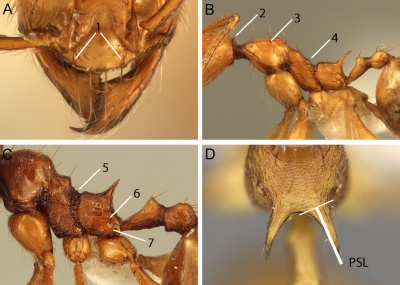 FIGURE 1 A) Pheidole pulchella, full-face view of minor worker: the two lines show the lateral clypeal carinae on the sides of the clypeus (1). B) P. pulchella, lateral view of minor worker: illustrating posterior head margin with a weakly developed occipital carina (2), promesonotum with inconspicuous humeri (3), and second mesonotal process not reduced (4). C) P. pulchella, lateral view of major worker: illustrating second mesonotal process reduced to a small ridge anterior of the metanotal groove (5) and well-developed metapleural carina (6) situated above the metapleural gland scrobe (7). D) P. pulchella, in oblique fronto-dorsal (dorsocaudad) view (Will Ericson 2011): measurement of propodeal spine length (PSL), the bold line representing the measurement, bordered by the perpendicular line across the base of the spine.

Both worker subcastes with a well-developed postpetiolar ventral process, similar to the species of the megacephala complex, but distinctly separated from them by the previous character combination.

Minor workers: head shape in full-face view variable among species, but never square with angulate posterolateral corners, from short and rounded (CI: 85–98) with sides of head strongly convex, posterior margin convex (Pheidole dea), or almost straight (Pheidole rebeccae), to long-elliptical (CI: 73–84), sub-angular at eye-level and posteriorly elongate towards occipital carina (Pheidole christinae, Pheidole heliosa). Mandibles smooth and shiny, sometimes with very superficial rugulae, laterally with weak longitudinal rugulae. Eyes situated near midlength of the head, of medium size (EI: 19–29). Scapes moderately to very long (SI: 102–174) and surpassing posterior head margin by one quarter to approximately one third of their length. Occipital carina always conspicuous in full-face view. Mesonotal declivity interrupted by promesonotal process, followed by a smaller process between promesonotal process and metanotal groove. The second, smaller, process is reduced and less conspicuous in some species. Propodeal spines long and spinose, much longer than distance between their bases (PSLI: 21–40), curved posteriorly towards petiole, rarely straight. Promesonotum, in lateral view, with angulate to subangulate edges, pronotal dorsum flat to weakly rounded, never strongly convex. Petiole longer than postpetiole (PpLI: 117–223), and in dorsal view usually about half as wide (PpWI: 152–232). Postpetiole also with well-developed convex ventral process and about as high as long, with subglobular to globular shape in profile. In dorsal view postpetiole about as long as wide, with a roughly trapezoidal shape. Pilosity with few to many long acute standing hairs, some species with hair apices truncate (or bifurcate), but in some species almost completely absent from dorsum of head, meso- and metasoma. Mesonotum and propodeum often with shorter, suberect to subdecumbent hairs. Standing hairs never very short and stiff. Between long erect hairs on head often shorter suberect to subdecumbent hairs present. Sculpture variable between species, with relatively little intraspecific variation, from completely and strongly punctate (Pheidole nimba) to mostly smooth and shiny (Pheidole rebeccae), but mesonotum and propodeum never completely smooth and shiny, at least partly punctate.

The Pheidole pulchella species group was defined in the process of our identification efforts of two very distinct groups of specimens from the Kakamega Forest in Western Kenya and from the Budongo and Rabongo Forests in Uganda. Both were at first identified as P. pulchella. Comparison with type material later revealed the dark colored morphospecies to be conspecific with P. dea Santschi from the Democratic Republic of Congo. We are now able to describe the previously unknown major workers. The orange colored specimens from Budongo Forest belong to a previously undescribed species and are likely to be closely related to P. pulchella. In subsequent type material examinations and museum visits, additional undescribed material was found from the Ivory Coast in the West, along the equatorial rainforest belt to Gabon, Central African Republic, towards Kenya and Tanzania in the East. In their general morphology the species in this group are well separated from those of other groups.

Most of the collection localities for species of the P. pulchella group are in rainforests; habitats of a few are not indicated on the labels. Specimens were caught in pitfall-traps, leaf-litter extractions, by beating of the lower vegetation, or by hand-collection. Thus, the species in this group are most likely forest specialists living and/or foraging on the ground and in the lower vegetation. Their conspicuous morphology with the relatively large size, long spines and appendages, and well-developed eyes indicates that these species are not living within, but rather upon or above the leaf-litter layer. They possibly nest in dead wood, because several of the specimens, especially the more rarely observed majors, were collected from rotten logs. Still, the biology of this species group is largely unknown and there are no records or observations available, other than the collection data mentioned on the labels.