Two colonies collected by Stefan Cover and John E. Tobin at Cuzco Amazonica, Peru (Cover, collection notes) were in terra firme rainforest, nesting in rotten sticks on the forest floor. The colonies were small, with fewer than 100 workers and a single queen; one of the nests contained a seed cache. (Wilson 2003)

DIAGNOSIS Similar to Pheidole hasticeps, Pheidole subarmata, Pheidole synarmata and Pheidole triplex (see also the somewhat less similar Pheidole rhytifera), differing from these and other Pheidole by the following combination of traits.

Major: in side view the frontal lobe is elongated to form a forward-projecting, thin, spine-like lobe; humerus strongly developed as protuberant lobes; postpetiolar node spinose; head quadrate; rear half of head and almost all of body smooth and shiny.

This is probably the series noted by W. L. Brown (1981: 526) as representing a species distinct from subarmata. 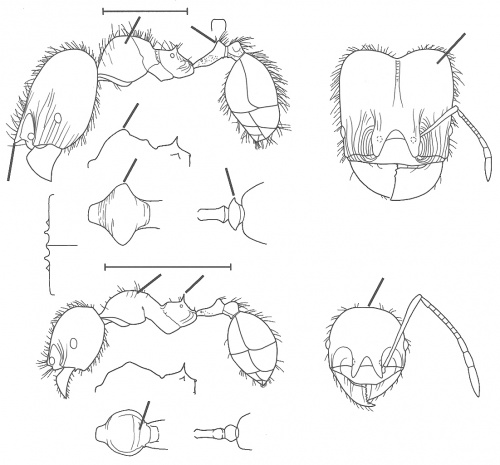 Gr, L allarmata, the "other one" bearing arms, referring to the species' similarity to subarmata and synarmata.