According to Longino (1997), amabilis occurs in wet forest. Nests have been found in Cecropia sapling internodes, in foliar pouches of a myrmecophytic melastome, and in a dead stick in leaf litter. The colony in the dead stick was separated from a colony of Pheidole scrobifera by a plug of woody frass; fighting between the two species ensued when the plug was removed. (Wilson 2003)

A medium-sized, concolorous yellow species whose major is distinguished by the slightly concave profile of the posterior half of the head capsule; also possessing a carpet of dense, evenly short, forward-projecting, subdecumbent (45°-angled from surface) hairs on the posterior half of the head and occiput; weak but distinct mesonotal convexity; and short, nearly vertical propodeal spines.

Similar to Pheidole angulifera, Pheidole boliviana, Pheidole crinita, Pheidole melastomae, Pheidole mixteca, Pheidole scitula, Pheidole terresi and Pheidole tysoni but readily distinguished by the above traits as well as by various differences in sculpture and color. 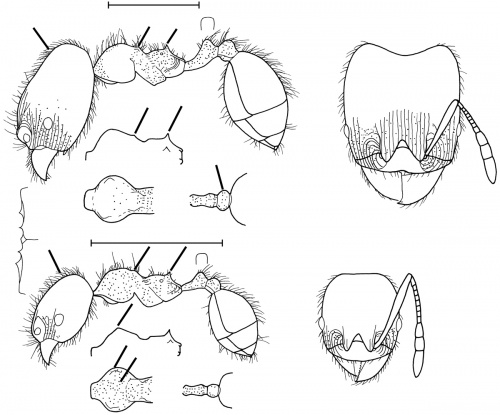