At the type locality in Peru, Stefan Cover (unpublished collection notes) found amazonica to be apparently the most abundant of all Pheidole species, ranging from terra firme forest into seasonally flooded forest and nesting in rotten sticks or branches on the forest floor. Colonies contained several hundred workers and a single queen. No seed caches were found in any of the 21 nests dissected. (Wilson 2003)

Major: dorsal half of the posterior head surface in profile flat; occipital margin in full-face view deeply and broadly concave; propodeal spines directed to the rear, not vertical to the basal propodeal face; an indistinct, circular brown spot present on vertex; a patch of rugoreticulum present laterad to each antennal fossa. 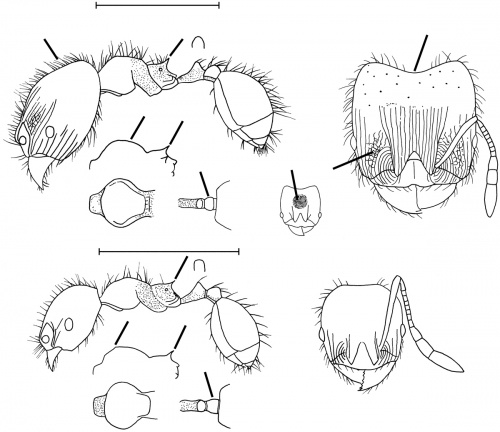 L amazonica, a reference to the geographical region of origin.