This species inhabits well-developed forests in lowlands and hill areas. A colony collected from Mahua Waterfall area (Eg00-BOR-100) nested in the soil under a stone, and consisted of only one dealate queen, majors, minors and immatures. (Eguchi 2001)

Eguchi (2001) - This species is very peculiar among Indo-Chinese and Indo-Malayan congeners in having the following characteristics in the major: each dorsolateral portion of promesonotal dome develops into a stout horn on each side; head without frontal carina and antennal scrobe; eye relatively small; postpetiole relatively large.

Subcastes collected from the Mahua Waterfall area are much larger in size and darker in color than those from Lambir; horns on promesonotal dome of the major are well developed in the latter than in the former. 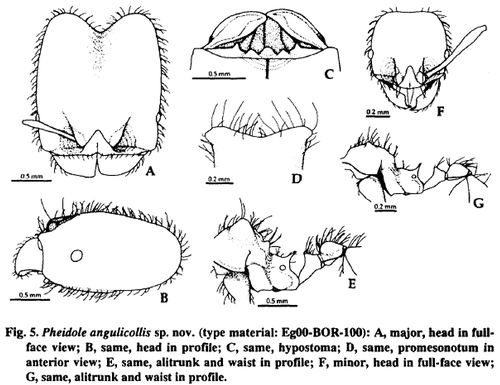 Major Measurements and indices (n=9): TL 2.6-3.6 mm, HL 1.26-1.93 mm, HW 1.11-1.66 mm, SL 0.58-0.76 mm, FL 0.72-1.05 mm, CI 84-88, SI 46-54, FI 63-66. Head broadest at around 1/2-3/5 distance of head (as measured from the mid-point of a transverse line spanning the anteriormost and posteriormost projecting points, respectively (Fig. 5A), in profile not impressed on vertex (Fig. 5B). Hypostoma bearing three distinct median processes, of which medianmost one is stout (Fig. 5C). Clypeus without a median longitudinal carina, with anterior margin weakly concave medially. Eye situated just in front of 1/3 distance of head; distance between mandibular insertion and anterior margin of eye 2.1-2.6 times as long as maximal diameter of eye. Frontal carina inconspicuous, extending backward to 1/3-2/3 distance of head. Antennal scrobe present only around antennal insertion. Antenna with 3-segmented club; scape extending backward to 1/2-3/5 distance of head; terminal segment 1.0-1.1 times as long as preceding two segments together. Masticatory margin of mandible with apical and preapical teeth, and a denticle in front of basal angle. Promesonotum forming a high dome, with a small or inconspicuous prominence on its posterior declivity (Fig. 5E); the prominence in anterior view not concave medially; each dorsolateral portion of the dome produced as a stout horn directing dorsolaterally on each side (Fig. 5D, E). Mesopleuron without a distinct transverse impression. Propodeal spine horn-like, 3.0-4.5 times as long as diameter of propodeal spiracle. Petiole 1.2-1.3 times as long as postpetiole (excluding helcium); petiolar node high, in posterior view not emarginate at apex. Postpetiole 2.3-2.8 times as broad as petiolar node.