These ants, which are limited to drier areas of Australia, can be locally common, nesting in open soil or under rocks. Although little is known about their biology they are thought to be largely subterranean and specialist predators on termites.

The antennae are 12 segmented (including the scape). The front margin of the clypeus has short to long hairs which straddle the mid-line of the head and lacks a single central hair or seta. The eyes are small, with at most 5 facets (ommatidia) in their greatest diameter. The upper surface of the propodeum is approximately even with the pronotum and mesonotum, so that the upper surface of the mesosoma forms a uniform arch interrupted only by the shallow metanotal groove. The size of workers is highly variable between majors and minors (polymorphic).

Heterick (2009) - In the SWBP, WA these ants can be locally common in both laterite and sandy soils in the Perth region, where they are often found in association with termites. Nests are very frequently located under rocks. They also occur in the wheatbelt and along the south coast. Elsewhere in Australia, this ant has been recorded from NSW, the NT, SA and Vic.

Wheeler (1934) - A few specimens of this extraordinary ant were taken by Dr. Darlington from a small colony at Nancy Cove (X. 24, '31). It is rather rare in the vicinity of Perth but I found many fine colonies at Margaret River. Unlike nearly all the other species of the huge, cosmopolitan genus Pheidole, it is decidedly hypogacic in habits, has very poorly developed eyes and an extremely polymorphic soldier caste. The colonies must be very difficult to detect during the dry season. In the moist open forests about Margaret River, however, they are easily found under large stones deeply imbedded in the soil. When fully developed the colonies comprise hundreds of individuals and thousands of subspherical larvaei, and it is only in such flourishing colonies that one encounters perfect series of soldiers showing all the transitions between huge, large-headed forms and minute, small-headed workers proper. The appearance and behaviour of this ant is so different from other species of Pheidole that I am inclined to regard Anisopheidole as an independent, exclusively Australian genus.

Slowly, carefully, purposefully, Pheidole antipodum workers emerge from their underground labyrinth, ready to defend against any intruders that would threaten the success of their annual release of the colony's alates (queens and males). Once a solid ring of defense has been set up by workers of all sizes, the alates cautiously emerge - wary of predators, but eager to fly off, their instinct to disperse strong. Workers control them by climbing all over them to prevent them flying off too soon. Although the previous weeks rain has triggered activity within the alates, specific microclimactic conditions will dictate when the colony actually releases them. Brigadoon, Western Australia. Photo by Farhan Bokhari, 30 May 2009.

TL between 3 and 9 mm ; showing complete monophasic allometry with a continuous series between the smallest minor and the largest major worker. Eyes moderately developed 3-4 ommatidia in the smallest worker to 29 (also a single median ocellus) in the large majors. Antennae 1 2-segmented with a distinct 3-segmented club (Fig. 88). Palpal formula 2,2. Dental formula inconstant ; in the smaller workers, it is apparently 1 +8 originally, but presumably the very small subapical teeth are rapidly abraded, and workers in the same size range may be 1 + 1 ; in media and major workers, the dental formula is basically 1 + 5, but similarly any number from 1 to 5 small rounded subapical teeth may remain on any particular specimen. Canthellus thick at its base, tapering and curving inwards and almost meeting the basal margin ; trulleum very distinct ; mandalus abutting the ginglymus. Labrum cleft. 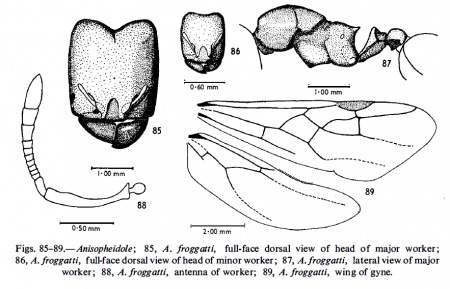 Clypeus in the minor worker (Fig. 86) smooth, with the median area strongly swollen ; bearing a pair of intercarinal setae, 4 paracarinal setae and a well-developed series of lateral setae. In the major worker (Fig. 85), the relative length of the clypeus is reduced compared to its width, and the lateral margins of the median area are strongly emphasized by longitudinal rugae continuous with those on the frontal carinae ; the setae are comparatively reduced and not in such an orderly arrangement - about 6 may be designated as intercarinal and 4 as paracarinal. The frontal carinae barely cover the antennal sockets in the small minors, but in the larger majors the frontal carinae are extended laterally to cover part of the scapes as well. The head of the minors is rounded ; that of the majors has pronounced, separated occipital lobes. Workers of intermediate size are intermediate in all these characters. Anterior tentorial pits close to the antennal sockets, rather superficial in minors, increasingly impressed in larger workers.

Alitrunk of minor workers with promesonotal suture distinct only to the height of the spiracle, obsolescent on the dorsum ; metanotal groove distinct, deeply impressed ; propodeum angulate, with dorsum and slightly concave declivity meeting the pleurae at the distinct propodeal carinae, which are continued from the inferior propodeal plates onto the dorsum to the metanotal groove. In the major worker (Fig. 87), the alitrunk is partially gyne segmented, with accentuated humeral angles ; the propodeum is stoutly dentate, the distinct teeth being directed posteriorly and divergently ; the propodeal carinae are continuous from the inferior propodeal plates to the propodeal teeth and forward on the dorsum to the metanotal-propodeal suture, although the carinae are somewhat disrupted in the largest majors by the heavy rugose sculpturation.

Petiole distinctly pedunculate ; node in the minor workers simple, rounded in profile, strongly transverse and flat on top when viewed from behind. In the smallest workers the node shows a tendency to be transversely binodal, this being very strongly developed in the majors, where the petiole is also strongly modelled and sculptured. Subpetiolar process longitudinally cultrate. Postpetiole simple, nodiform, bearing lateral conules in the majors ; anterior subpostpetiolar process cuneate, posterior process not developed.

The minor workers are yellow-brown and rather hairy, and are unsculptured except for a few faint rugae on the genae below the eyes, rather faint, wavy rugae on the metapleurae, and shallow but intense puncturation on the ventral petiole. The majors are brown with yellow-brown gaster, heavily sclerotized and hairy ; the genae to slightly above the eyes, the frons to the ocellus, the frontal carinae and the lateral areas of the clypeus are all densely rugose, and the pleurae of the ali trunk are moderately to heavily rugose ; the ventral part of the petiole is strongly punctate and the petiole bears a strong lateral longitudinal ridge and a pronounced transverse dorsal ridge ; the postpetiole also bears pronounced transverse ridges.

Much larger than the major worker (12 • 8 mm) but generally with the characters of the major except that the occipital margin of the head is straight; the alitrunk is gyne segmented but without pronounced humeral angles (bearing wings in virgins) ; and the petiole is stouter, more elaborately sculptured and the node is more strongly transverse than in the major worker. Postpetiole expanded posteriorly, very broadly attached to the gaster. Wings (Fig. 89) as in Pheidologeton except for a more or less incomplete r-m crossvein just distad of r.

Smaller than the gyne, slightly larger than the larger major worker. Antennae 1 3-segmented ; scape short and subcylindrical, pedicellus small and rounded, flagellar segments rather short and barrel-shaped. Clypeus strongly swollen medially, shallowly inserted between the antennal sockets. Mandibles weakly developed, spatulate, not opposable, only apical tooth present. Notauli absent, parapsidal furrows distinct. Petiole and postpetiole as in gyne, though not as strongly modelled. Wings as in gyne. Genitalia as in Pheidologeton.