At Cuzco Amazónico, near Puerto Maldonado, Peru, Stefan Cover (unpublished collection notes) found three colonies of asperithorax in terra firme and seasonally flooded rainforest, nesting respectively in a rotten log, under the bark of an understory tree, and in a small rotten branch hanging in understory vegetation. (Wilson 2003)

In addition to the types, I have seen series from Mato Grosso, Brazil, and near Puerto Maldonado, Tambopata, in the Peruvian Amazon. (Wilson 2003)

DaRocha et al. (2015) studied the diversity of ants found in bromeliads of a single large tree of Erythrina, a common cocoa shade tree, at an agricultural research center in Ilhéus, Brazil. Forty-seven species of ants were found in 36 of 52 the bromeliads examined. Bromeliads with suspended soil and those that were larger had higher ant diversity. Pheidole asperithorax was found in 8 different bromeliads but it was not clear if this ant was associated with twigs and cavities or the suspended soil or litter of the plants.

From Wilson (2003): A member of the “flavens complex” within the larger flavens group, including Pheidole breviscapa (now a junior synonym of Pheidole perpusilla), Pheidole exigua, Pheidole flavens, Pheidole nuculiceps, Pheidole orbica and Pheidole sculptior, as well as the less similar Pheidole nitidicollis and species placed close to it (see under Pheidole nitidicollis), and differing by the following combination of traits.

Major: humerus a prominent lobe that rises well above the rest of the promesonotum behind it in dorsal-oblique view; entire dorsal surface of the head, including occiput, all of clypeus, and frontal triangle, covered by parallel longitudinal carinulae; all of pronotal dorsum covered by transverse carinulae; most of dorsal head surface, the promesonotal dorsum, mesopleuron, propodeum, and sides of waist foveolate and opaque, with rest of body smooth and shiny; postpetiolar node from above forming a half-circle; propodeal spines short.

Minor: carinulae present on head anterior to level of eye; dorsum of postpetiolar node and all of gaster smooth and shiny, but all the rest of head and body foveolate and opaque. 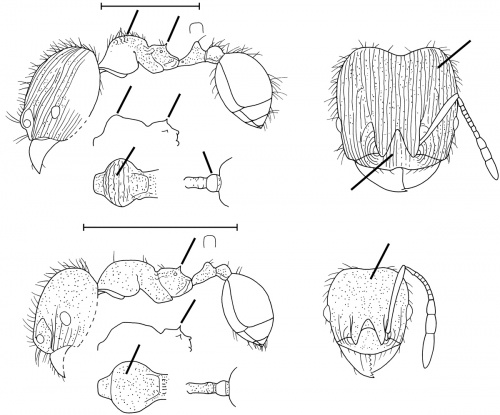 L asperithorax, rough thorax, presumably with reference to the liberal amount of sculpturing on the mesosoma. (Wilson 2003)