Winged queens were collected from the type nest sometime during 9–13 January. (Wilson 2003)

In addition to the type locality in Huila, bellatrix has been collected in Cundinamarca (1100 m), Magdalena (elevation unknown), and Meta (1000 m). (Wilson 2003)

DIAGNOSIS An unusually large member of the tristis group, similar to Pheidole napoensis of Ecuador and more distantly so to Pheidole pepo, Pheidole rotundiceps, Pheidole sphaerica and Pheidole subsphaerica, which are species variously from Colombia and Ecuador, and distinguished by the following set of traits.

Major: promesonotum in side view forms a very large hump towering over the propodeum; from above the humeri are very broad, completely covering the rest of the pronotum below; from above the anterior margin of the postpetiolar node forms a perfect semicircle, with the posterior border a straight line forming its base; antennal scrobes absent; entire body covered by dense pilosity. 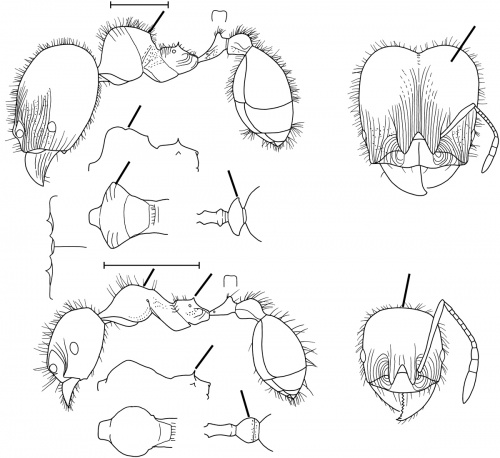 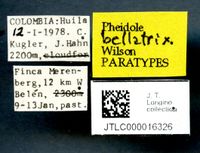