At La Sagesse Bay, Stefan Cover and I found P. bruesi abundant in dry, semi-deciduous scrub woodland, nesting in soil covered by thin leaf litter. At Fort Jeudy, a nest was found in dry deciduous forest, in a small rotting stump with galleries extending downward into the soil. In a nutmeg grove at Concord Falls, we found nests common in the soil. A nest excavated at Sagesse Bay contained a single queen. Majors and minors were readily attracted to baits, following odor trails laid by individually foraging scout workers. A male was collected in a nest on Grenada by C. T. Brues in September. (Wilson 2003)

Known only from Grenada and, probably, Amazonian Brazil. (Wilson 2003)

From Wilson (2003): A small, yellow, nearly hairless member of the diligens group, similar to Pheidole diligens, Pheidole inversa, Pheidole laidlowi, Pheidole radoszkowskii and Pheidole triconstricta, and differing by the following combination of traits.

Minor: promesonotal profile 3-lobed. The Grenada series collected by Stefan Cover and me are variable, especially in the amount of cephalic sculpturing. A series nearly identical to the Grenadan population was collected by William L. Brown between Manaus and Itacoatiara, Amazonas, Brazil; it differs from the Grenada bruesi types only in the convex occiput (frontal view) and convex petiolar dorsal border (rear view) of the minor. Thus the status of bruesi as a Grenadan or even West Indian endemic is in doubt. 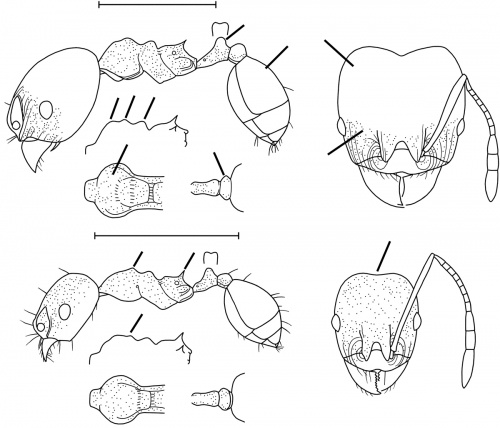 From Wilson (2003): Named after the collector, the entomologist Charles T. Brues.