At Cuzco Amazónico Stefan Cover (personal communication) found cardiella in both terra firme and seasonally flooded rainforest, nesting in soil, litter, and small pieces of rotten wood. Colonies appeared to be small, and in some cases occupied more than one nest site. (Wilson 2003)

Recorded from the type locality and from Manabí and Pichincha Provinces of Ecuador. (Wilson 2003)

A member of the flavens group, most similar to Pheidole goeldii, Pheidole mittermeieri, Pheidole nuculiceps, Pheidole sculptior and Pheidole striaticeps. Distinguished by the following combination of traits.

Minor: all of head and mesosoma foveolate and opaque; eye set forward on head, separated from genal border by a distance about equal to Eye Length; carinulae on head fail to reach eye level.

Both castes are sometimes much darker in shade. 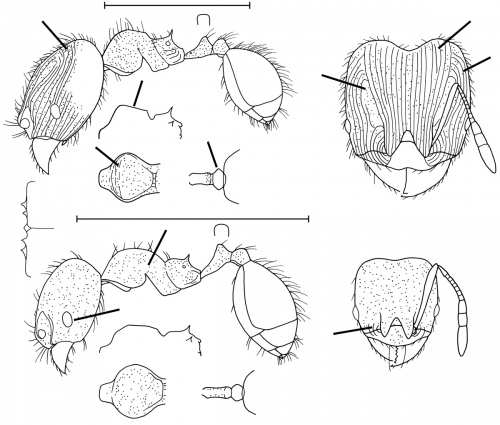 Gr cardiella, little heart, referring to the head shape of the major.