Pheidole casta is evidently a rare species. The type colony was found in a canyon of the Rio Grande, near Langtry, nesting in soil beneath cedars. The only other Texan record (R. E. Gregg, collector) is from Cameron Co., about 20 km east of Brownsville. (Wilson 2003)

From Wilson (2003): A medium-sized, yellow member of the flavens group, whose major is characterized by its elongate head, shallow antennal scrobes, exclusively carinulate cephalic structure, conulate postpetiole, and slightly contrasting brownish spot on the center of the dorsum of the head capsule.

Similar to Pheidole mera, also of Texas, and distinguished from it by the less bulbous promesonotal profile in dorsal-oblique view, smooth occiput, and longitudinal (not oblique) orientation of the carinulae mesad to the eye.

COLOR Major: concolorous yellow, with a circular patch of slightly contrasting brownish yellow in center of dorsum of head.

The minor worker from the Gregg colony collection has the head and mesosomal dorsum completely foveolate. Specimens from Estado Mexico (km 127, Highway 57) in the Museum of Comparative Zoology appear to belong to this species, although they are darker in color than the types (brownish yellow), and the sides of the heads of the minors are smooth and shiny. 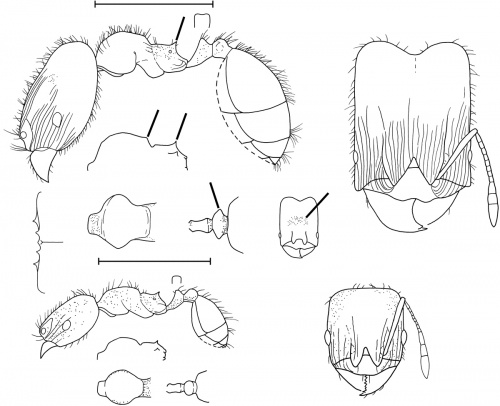