According to Stefan Cover, who has collected intensively within the range of cavigenis, this species occurs in grassy gaps in juniper-oak-pinyon woodlands at mid-elevations. Nests are cryptic and seeds are sometimes found inside. Colonies appear to consist of no more than 200–300 individuals. (Wilson 2003)

Known from several collections in the Huachuca Mts; thence west to Sycamore Canyon in the Pajarito Mts., about 20 miles west of Nogales (Stefan Cover). A series in the Museum of Comparative Zoology from Bocoyna, Chihuahua, belongs to this species but with some differences; it may represent a geographical variant. (Wilson 2003)

From Wilson (2003): DIAGNOSIS A member of the “pilifera complex” of the larger pilifera group; for a characterization of the complex, see under Pheidole pilifera. P. cavigenis is distinguished within the complex by the following combination of traits. 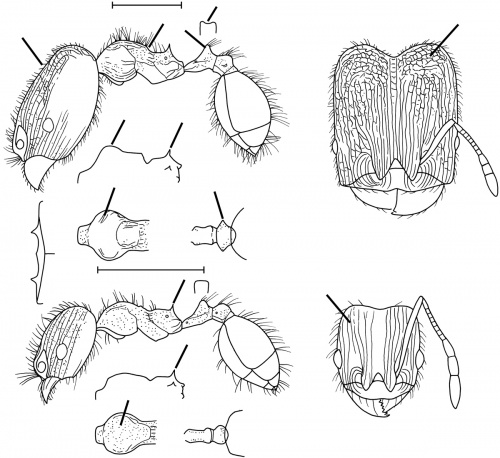 Museum of Comparative Zoology - as reported in Wilson (2003)