In Costa Rica, christopherseni has been found in rainforest to 600 m, and in Colombia once in seasonal dry forest. This bizarre little species is strictly arboreal so far as is known. The type colony was nesting in a “very thin hollow stem” (Forel). Longino (1997). reports colonies from Costa Rica in the live, hollow stems of Bauhinia vines (a legume), as well as in a bignoniaceous liana, a small tree, and Cecropia saplings. (Wilson 2003)

In addition to the type locality (Panama), Longino (1997). has recorded christopherseni from the Atlantic lowlands of Costa Rica and the Tayrona National Park of Colombia. (Wilson 2003)

From Wilson (2003): One of the most distinctive of all Pheidole species, marked by extremely small size, greatly elongated head of the major, and almost complete lack of carinulae anywhere on the bodies of major and minor, even around the antennal fossae and on the metapleural gland bulla. In some series at least, majors have faint longitudinal carinulae on the frontal lobes, and both castes have a few such traces on sides of the head anterior to the eyes. 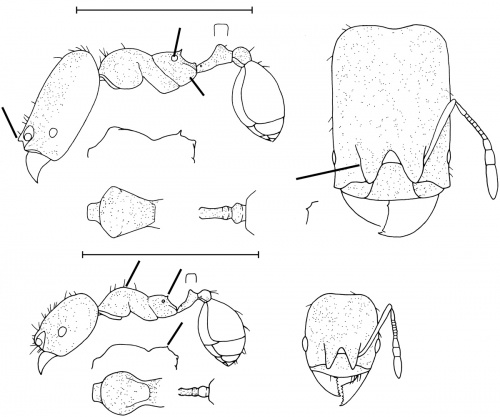