The type series was taken from several colonies found under stones by Wheeler (1908h) at Austin and New Braunfels, Texas. In addition Stefan Cover (unpublished notes) found several colonies and colony fragments nesting under stones at Pedernales Falls State Park, Blanco Co., Texas, in juniper and juniper-oak-mesquite woodland. Winged males were found by W. M. Wheeler on 27 May 1903. This species, if truly local, may be threatened by the advance of dense populations of the red imported fire ant (Solenopsis invicta) into the Texas hill country. Cover found it only in areas not yet occupied by fire ant colonies. (Wilson 2003)

Known only from the vicinity of Austin and New Braunfels, central Texas. (Wilson 2003)

From Wilson (2003): An unusual member of the flavens group distinguished from other species of the genus as follows.

Major: yellow; mesosomal pilosity very sparse, consisting mostly of several clavate hairs; similar hairs present on occiput and waist; humerus raised slightly and subangulate; rugoreticula present between each eye and antennal fossa, and on the edges of the humeri; postpetiole from above elliptical. 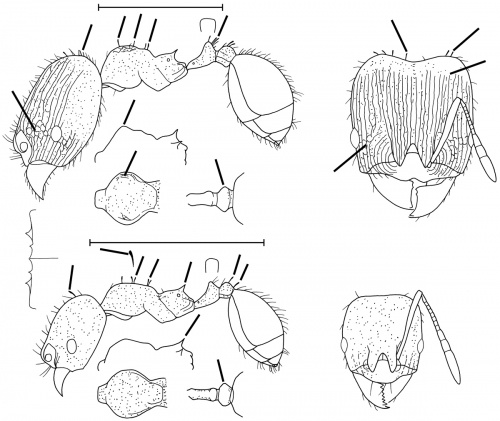 L constipata, crowded or pressed together, allusion unknown, possibly to the compressed nature of the clavate hairs. (Wilson 2003)