Longino (1997) found two colonies in primary rainforest on the Costa Rican Atlantic slope, one nesting in a rotting cavity ofa live branch, the other in a dead stick. Douglas Yu (specimen data) discovered a colony in Peru in cavities of the myrmecophyte Cordia nodosa. Colonies have been found in rainforest nesting in dead sticks and in the cavities of live myrmecophytes of the genera Cordia and Piper. Winged reproductives have been collected in nests in different localities from April to November. (Wilson 2003)

Lenko & Brown found this species twice near Manaus, in the heart of Amazoniam Brazil, during 1962. The first collection (M-101) was a large colony or group of colonies found under the bark of a large, punky "white-rotten" log in rain forest at km 40 on the road from Manaus to Itacoatiara, NE of Manaus (27. VIII_1962), The second colony with winged queens was taken in the base of a rotten branch of a tree about 2 m above the ground in second growth forest bordering a plantation of "Brazil" nut or "castanha do Para", at Aleixo, 14 km SE Manaus, on 11.IX. 1961. In Guyana, as indicated by Wheeler, this species has been found nesting in hollow petioles of Tachigalia. (Kempf and Brown 1968).

Major: in side view frontal lobes project forward as equilateral triangles; humeri angulate, seen from above projecting slightly beyond the rest of the pronotum below it; propodeal spiracle very large, its diameter greater than the base of the propodeal spine in side view; postpetiole oval from above; head bicolored (see Color below); all of frontal lobes and space between frontal carinae filled with carinulae, which reach halfway from the level of the eyes to the level of the occiput.

Minor: propodeal spiracle large, about as wide as the base of the propodeal spine; humerus in dorsal-oblique view angulate; postpetiolar node from side well developed. 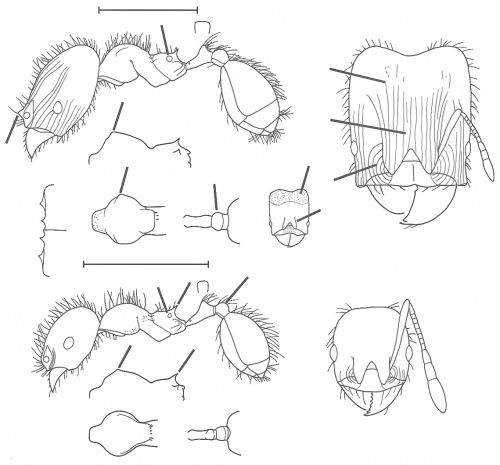