P. desertorum occurs to at least 1700 m in a wide range of desert habitats, including mesquite or acacia-dominated bajadas, rocky slopes, and desert grasslands. The colonies construct large crater nests with single entrance holes. Helms (1995) reports that colonies in southeastern Arizona are large, at maturity comprising 2,500–25,000 workers and one to multiple queens, and often occur in multiple nests. Foragers, mostly minors but with a few majors also present, are active outside the nest at night and following rains. On diet, Stefan Cover (personal communication) has stated from extensive personal experience, “Contrary to previous reports in the literature (Davidson 1977a, b; Whitford 1978), P. desertorum is an aggressive predator and scavenger, not a granivore. Seeds are only rarely collected, and then in small quantities.” Most colonies produce reproductives each year, which are extremely sex-biased from colony to colony. Winged reproductives have been found in nests from early June to late August. According to Helms, mating flights occur prior to sunrise in the late summer, following rainfall. Males form aerial swarms into which the winged queens fly; mating then occurs on the ground, after which the queens fly away in search of nest sites. Colonies are usually founded by single queens, but occasionally by small groups. Droual (1983) has described the remarkably efficient maneuvers of nest defense and evacuation by desertorum colonies under attack by army ants (Neivamyrmex nigrescens). Droual and Topoff (1981) have demonstrated that emigrations to new nest sites also occur at a high frequency even under apparently stable environmental conditions. (Wilson 2003)

The majors of this species are easily recognized by the long scapes, which extend nearly to the posterior lateral corners, or even past the corners. The dorsum of the head is rugose, the regions between the rugae are mostly shining, although they may be somewhat granulose. (Mackay and Mackay 2002)

Abundant from western Oklahoma and Texas west to southern Utah, Nevada, and California, and south into northern Mexico. (Wilson 2003)

Wheeler's (1906) account of this species included the following: "The types of this species, comprising several specimens of each of the above described phases, were taken at Fort Davis, Texas (5400 feet), during June,. 1902. It forms rather populous colonies under stones or in rough crater nests, often in very dry spots in the desert, and like Ph. dentata is highly carnivorous. I have taken it also at Ash Fork, Prescott, Phoenix, and Tucson, Arizona (May, 1905). In Prescott one of the colonies was found nesting in a dry pine log. In both soldiers and workers from this locality the epinotal spines are very short, almost absent in the worker."

Mackay and Mackay (2002) - Habitat Sagebrush, desert scrub, arid grasslands, black grama grassland, fluff grass habitat, to oaks, pinyon-juniper, and ponderosa pine forests, up to 1600 meters in eleva-tion. Biology Nests are found under stones in areas of rocky loam and coarse sand, as well as gravel. These ants are very alert, fast and aggressive when the a large nest is disturbed. Brood was found in nests in March, April, August, and September, reproductives in August. This species may be polygynous, as multiple, dealate females are found in nests. This is a very common species in New Mexico, especially in arid ecosystems.

TEXAS: Ft. Davis, Jeff Davis Co., 1650 m, col. W. M. Wheeler. Museum of Comparative Zoology - as reported in Wilson (2003) Unless otherwise noted the text for the remainder of this section is reported from the publication that includes the original description.

From Wilson (2003): Similar to Pheidole hyatti, Pheidole portalensis, Pheidole vistana; see also Pheidole ariel, Pheidole sitiens and Pheidole skwarrae, distinguished from these and other members of the fallax group as follows.

Major: slender; yellow; antennal scapes very long, slightly exceeding the occipital corner; humerus subangular in dorsal-oblique view; propodeal spines short and slender in side view; a loose rugoreticulum extends from the lateral margins of each frontal lobe to the eye; central half of the dorsum of the head, mesopleuron, propodeum, and waist foveolate and opaque; the rest of the body smooth and shiny.

COLOR Major: reddish yellow except for gaster, which is yellowish brown. 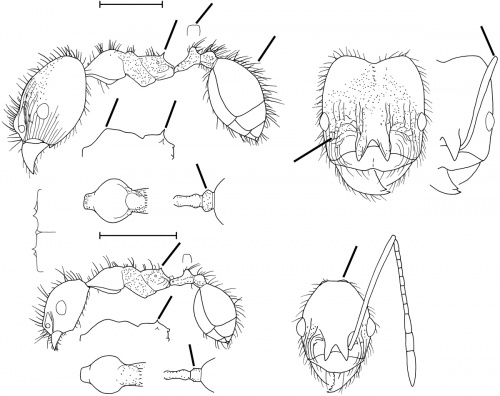