The type colony, found on a forested mountain ridge, was nesting in a 4-cm-wide, rotten tree branch on the ground. A cache of seeds was present, as well as a male (1-4 June). (Wilson 2003)

Known from Costa Rica and Columbia.

Major: a sharp, upcurved horn grows from the center of the clypeus; humeri are very prominent, seen from above extending beyond the rest of the pronotum below, and in dorsal-oblique view forming a large equilateral triangle; propodeal spines more than half as long as the propodeal basal face; carinulae and rugulae on the frontal lobes give way posteriorly to a tight rugoreticulum, which then yields to a loose rugoreticulum, and next to foveolae, which finally are replaced by a smooth zone on the occiput.

Minor: all of head and meso soma and most of waist foveolate; humeri angulate; propodeal spines half as long as the propodeal basal face and curved backwards. 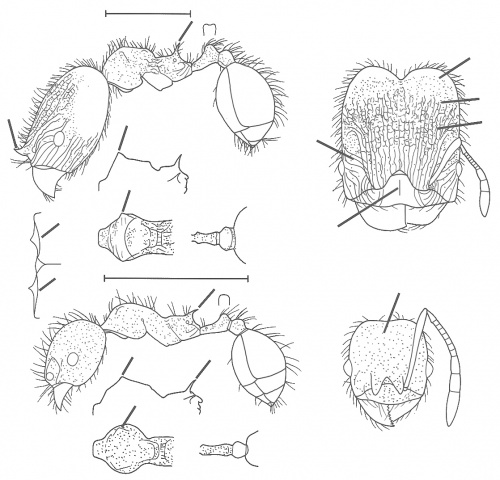