At Bald Point, Franklin Co., Florida, I found colonies nesting at a roadside in open sandy soil; and in Mobile, Alabama (in 1942) what was probably this species nesting beneath a whiskey bottle in a vacant lot. Winged reproductives have been found in nests during September and October. Stefan Cover (personal communication) reports that floridana “occurs in a variety of woodland habitats, nests in soil, litter, and rotten wood, and in both xeric and mesic situations. Colonies are monogynous, may contain 1000 or more ants, and are sometimes polydomous. The species is omnivorous, but does not appear to harvest seeds.” (Wilson 2003)

P. floridana has been recorded by Stefan Cover (personal communication) from the coastal plain of North Carolina south to the Florida Keys and west to central Texas (Austin and surrounding area), thence south into Mexico. (Wilson 2003)

From Wilson (2003): Nearly identical with Pheidole bilimeki and its Neotropical variants, distinguished as follows.

Minor: antennal scapes relatively short, just reaching or barely surpassing the occipital corner; first gastral tergite smooth and shiny, with at most a light shagreening at the base of the tergite.

Both castes are consistently yellow. P. floridana is very close to Pheidole bilimeki, and also to Pheidole stomachosa of Jamaica, which coexists on the island with bilimeki. P. stomachosa is distinguished from both bilimeki and floridana by the minor’s head and pronotum being smooth and shiny (q.v.). 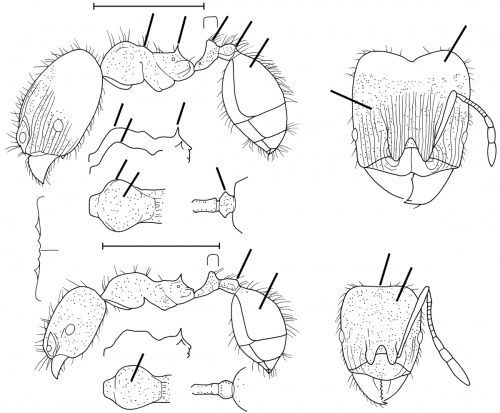 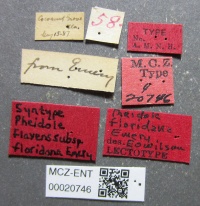