Eguchi (2001) - Within Borneo this species has so far been collected only from well-developed lowland forests in Sarawak. In Bali Satria et al. (2015) found two colonies of Odontomachus simillimus near the base of living trees in a cacao plantation that "coexisted with colonies of the myrmicine Pheidole ghigii."

Eguchi (2001a) - This species is characterised among Indo-Chinese and Indo-Malayan congeners by a combination of the following characteristics: hypostoma of the major bearing a pair of large median processes; posterior declivity of promesonotal dome of both the subcastes bearing a distinct prominence; promesonotal dome of the minor with a pair of low tubercles dorsolaterally; eye of both the subcastes relatively small; distance between mandibular insertion and anterior margin of eye 2.0-2.1 times as long as maximal diameter of eye in the major, and 1.3-1.5 times in the minor; postpetiole in both the subcastes massive. 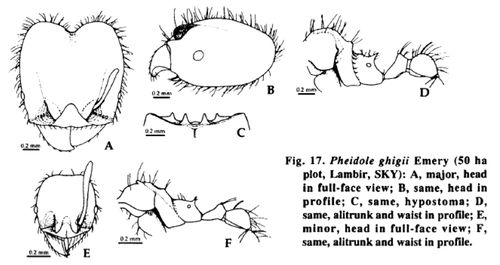 Eguchi (2001a) - Major (n=3): TL 2.4-3.1 mm, HL 1.30-1.47 mm, HW 1.22-1.39 mm, SL 0.60-0.65 mm, FL 0.82-0.88 mm, CI 94-95, SI 47-49, FI 63-67. Head broadest around 3/5-2/3 distance of head (as measured from the mid-point of a transverse line spanning the anteriormost and posteriormost projecting points, respectively) (Fig. 17 A), in profile not impressed on vertex (Fig. 17B). Hypostoma bearing a pair of large median processes (Fig. 17C). Clypeus without a median longitudinal carina, with anterior margin weakly concave medially. Eye situated just in front of 1/3 distance of head; distance between mandibular insertion and anterior margin of eye 1.9-2.2 times as long as maximal diameter of eye. Frontal carina inconspicuous, extending backward to 3/5 distance of head. Antennal scrobe only present around antenna I insertion. Antenna with 3-segmented club; scape extending backward to 1/2-3/5 distance of head; terminal segment ca. 1.1 times as long as preceding two segments together. Masticatory margin of mandible with apical and preapical teeth, and a denticle in front of basal angle. Promesonotum forming a high dome, with a distinct prominence on its posterior declivity (Fig. 17D); the prominence in anterior view not or very weakly concave medially; each dorsolateral portion of the dome weakly produced outward. Mesopleuron without a distinct transverse impression. Propodeal spine horn-like, 2.5-3 times as long as diameter of propodeal spiracle. Petiole almost as long as postpetiole (excluding helcium); petiolar node in posterior view distinctly emarginate at apex. Postpetiole 2.2-2.4 times as broad as petiolar node.