This species is only known from type specimens. The type colony was found in mature terra firme rainforest, nesting in a 8-cm-wide dead branch 3 m from the ground. (Wilson 2003)

Major: yellow; humeri in dorsal-oblique view are a “sharkfin” shape, pointing forward, and from above extend just beyond the margins of the pronotum below; propodeal spines more than half as long as the propodeal basal face preceding them; postpetiole from above diamond-shaped; rugoreticulum fills space between each eye and adjacent antennal fossa, and rest of dorsal head surface mostly carinulate; most of dorsal head surface and all of mesosoma foveolate.

Minor: humeri acute-angular, each bearing a long seta at the tip; occiput narrowed, with a nuchal collar; all of head, mesosoma, and waist foveolate. 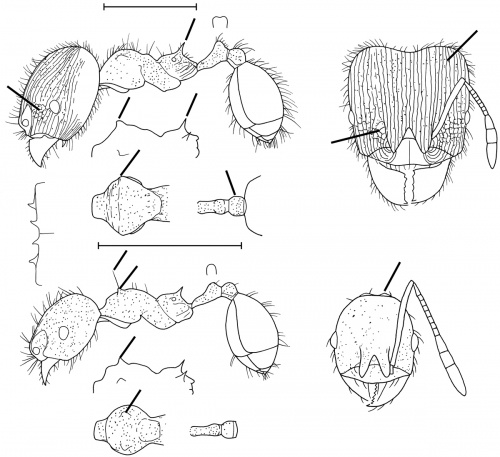