Nothing is known about the biology of gulo.

Longino (2019) - In most populations of P. gulo, the minor worker has a fully foveolate face and mesosoma. Specimens from Los Tuxtlas Biological Station in Veracruz, Mexico, and from the slopes of Volcán Atitlán in Guatemala have the face and parts of the pronotum smooth and shining. There is no known site of sympatry of the two forms. The morphospecies code JTL197 was used for the shiny form of P. gulo. In Economo et al. (2019) a shiny specimen from Volcán Atitlán is genetically close to a foveolate specimen from Nicaragua. Pending further evidence, I treat this as one species with geographic variation.

A member of the fallax group somewhat similar to Pheidole cockerelli and Pheidole perpilosa (see also the less similar species listed with them), but easily distinguished as follows. 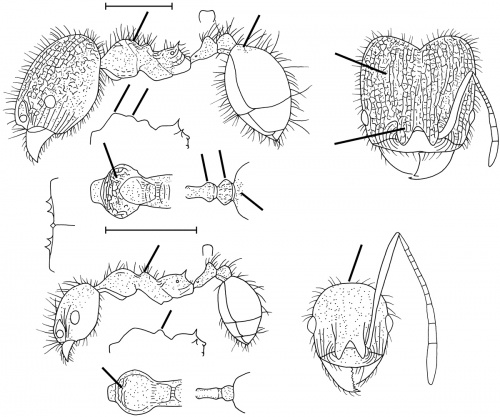