This species occurs in wet forest habitats, from sea level to 1800m elevation. It is often one of the most abundant species in Winkler or Berlese samples of forest floor litter, and may also recruit to baits. In spite of its abundance in Winkler samples, I have never encountered a nest. (Longino 2009)

The type series was collected on a steep, rocky forested slope by Bill Brown.

Within this morphological envelope there is wide variation in details of major worker head size and shape, and in the minor worker there is variation in size and the degree of development of irregular rugulae on the face and particularly on the promesonotum. In some cases there appear to be discrete forms in sympatry, and this “species” will almost certainly resolve into multiple cryptic species. There are some morphological patterns that occur over elevational gradients (montane forms tend to have major workers with larger and proportionally longer heads) and over horizontal distance (material from Panama and Costa Rica's southern Pacific coast looks slightly different from material from Costa Rica's Atlantic slope, which looks slightly different from material from southern Mexico).

The types of Wilson's Pheidole harrisonfordi, P. ruida, P. prolixa, and P. tenebra are very similar. Their measurements fall very close to each other among the larger spread of measurements in the complex as a whole. They match the dominant, somewhat uniform lowland form of P. harrisonfordi, and not the most conspicuous variants, which tend to be mid-elevation or montane. These names could come out of synonymy with further resolution of the complex, but at this point there are no morphological grounds for separating them.

A small light-colored member of the flavens group similar to Pheidole ceibana, Pheidole lignicola, Pheidole metallescens and Pheidole ruida, distinguished in the major by the bulbous pronotum in dorsal-oblique view, set off from a small but distinct mesonotal convexity, and the cephalic rugoreticulum, which starts as a patch at each occiput corner and runs anteriorly in a thin band to a patch just mesad to the eye. The minor is distinctive in the steep, nearly vertical descent of the posterior mesonotal face to the metanotum. 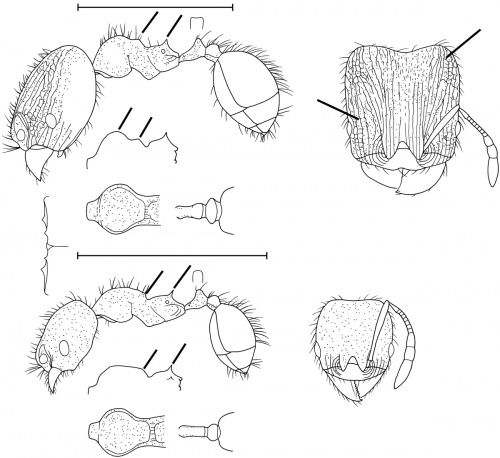 Named in honor of Harrison Ford, in recognition of his outstanding contribution in service and support to tropical conservation, hence the habitats in which the Pheidole ants will continue to exist.