According to Longino (1997), indagatrix occurs in moist to wet forests, both on the ground and in the canopy, and forages both day and night. It is equally flexible in nesting sites, with colonies having been found variously in and under dead wood on the ground, and in one case each, under accreted soil on the side of a tree trunk and in a hollow live stem. Winged males have been found in nests in January and March. (Wilson 2003)

A common species in Costa Rica from Meseta Central northward, up to 1500 m (Longino 1997).

A member of the fallax group with some similarities to Pheidole haskinsorum, Pheidole hector and Pheidole nubicola, distinguished as follows.

Major: antennal scape surpasses occipital corner by about its own maximum width; frontal lobes mostly rugoreticulate; pilosity dense and long over all the body, many hairs longer than Eye Length; rugoreticula mesad to each eye extend most of the way to the anterior border of head; all of posterior half of dorsal surface of head punctate and opaque, as well as most of pronotum; anterior half of central strip of first gastral tergite shagreened; propodeal spines long and thin; postpetiole from above diamond-shaped. 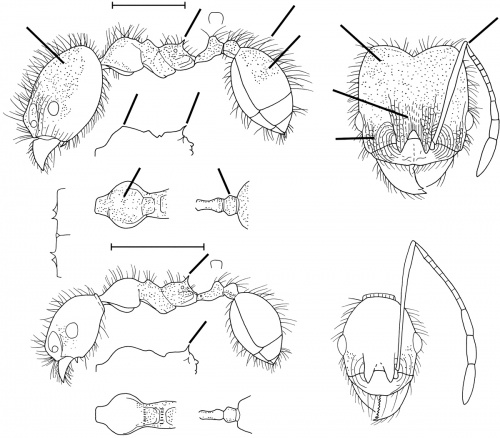