This species occurs in a wide variety of habitats: dry forest, rainforest, and cloud forest, from sea level to 1800m elevation, in disturbed synanthropic habitats or less disturbed forest with intact canopy. It can be locally common. Collections are most often from baits on forest floor, or scattered workers in Winkler samples. Major workers are often recruited to baits along with minor workers. The types of P. fariasana were from a nest found beneath a stone. (Longino 2009, under the name P. mooreorum)

Longino (2009, under the name P. mooreorum) - Over the range of the species there is strong intra- and inter-populational variation. Minor workers: the pronotum may be entirely and strongly foveolate (rarely), it may show a patchwork of foveolate sculpture and smooth shiny areas, or it may be completely smooth and shining. Correlated with this is face sculpture, which is usually completely smooth and shining, but in forms with more sculpture on the promesonotum the face may have very faint patches of foveolate sculpture. Major worker: in general the anterior face has longitudinal rugulae with smooth shiny interspaces, and the posterior face is completely smooth and shining. The transition may occur abruptly or gradually, and from just anterior to the level of the compound eyes to somewhat posterior to them. The medial area between the frontal carinae may be completely smooth and shining, or with variable numbers of longitudinal rugulae parallel to and beginning at the frontal carinae and fading medially. The strength and extent of face rugulae correlates with strength of pronotal sculpture on minor workers. The setae projecting from the side of the head in face view vary from long and suberect to short and appressed.

The minor workers of the type series of P. fariasana from Tamaulipas have the intermediate sculptural condition, in which the pronotum is mostly smooth and shining, with a narrow band of foveolate sculpture at the anterior margin and wrapping around onto the ventrolateral margin. The major workers have the face rugulae extending posterior to the compound eyes, and there are abundant suberect setae projecting from the side of the head. In the Sierra Madre de Chiapas, most collections have the intermediate sculptural condition, but the full range of variation occurs. At lower elevations in northern Chiapas, in wet forest areas from 500–1000m, the most common condition is for the pronotum of the minor worker to be almost to entirely smooth and shiny, and the side of the head in the major worker with shorter, more decumbent setae. The type series of P. mooreorum, from Veracruz, matches this lowland form, with the setae on the side of the head even more reduced than on the lowland Chiapas material.

Sparse minor worker collections from montane sites in Guatemala, and multiple collections with major workers from lowland dry forest habitat in northwestern Costa Rica are, on average, like the type series of P. fariasana. Occasionally the sculpture is more extensive. In some lighting conditions the Costa Rican material may have a very faint purple sheen.

In the Cordillera de Tilarán in Costa Rica, in moist forest around 1400m elevation, a relatively uniform population occurs in which the minor workers have a strongly sculptured pronotum, and the minor workers are somewhat bicolored, with mesosoma light brown and head and gaster darker brown.

In Chiapas, Mexico, P. mooreorum is broadly sympatric with P. purpurea, with the former being more abundant in middle to high elevations and the latter relatively more abundant in the lowlands. The minor workers are indistinguishable in the Sierra Madre de Chiapas, where both have an intermediate sculptural condition on the minor worker pronotum and neither have the purple sheen. In the Chiapas lowlands they are more differentiated, with P. mooreorum having a smooth pronotum and no purple sheen, and P. purpurea having a sculptured pronotum and often a purple sheen.

Given the high degree of morphological variability, it is likely that P. mooreorum will resolve into multiple cryptic species.

Longino (2019) - Pheidole insipida was overlooked in Wilson's 2003 revision. AntWeb images of the major worker match the common, widespread species that heretofore was identified as P. mooreorum. I have collected material of this species 50 km north of the type locality, and from the nearby type locality of P. mooreorum. This material closely matches the images of the type.

Minor: head and body plain dark brown; appendages light to yellowish brown except for tarsi, which are yellow. 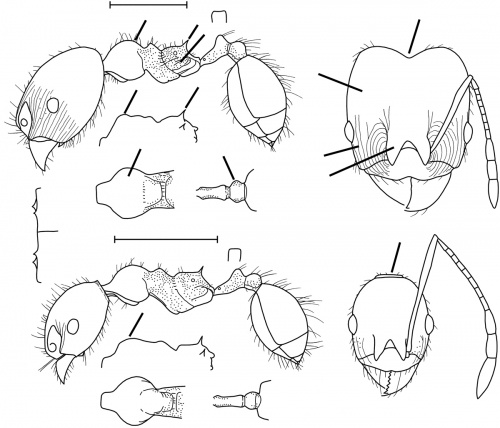 Pheidole mooreorum: Named in honor of Gordon and Betty Moore, in recognition of their outstanding contribution in service and support to tropical conservation, hence the habitats in which the Pheidole ants will continue to exist.