The type series was collected from primary forest on a steep hillside above farmland. (Wilson 2003)

Only known from the major worker.

Major: antennal scapes exceed occipital corners by twice their maximum width; carinulae originating on frontal lobes and along frontal carinae spread laterally out to create a fan-like pattern, with those coming from the more anterior parts of the frontal carinae turning almost horizontal to travel toward the sides of the head; rugoreticula on each side of the head extend from the eye to the antennal fossa; occiput narrowed, the nadir of its cleft deep and rounded; promesonotum and all surfaces of the propodeum carinulate.

The holotype is more heavily sculptured than the average. 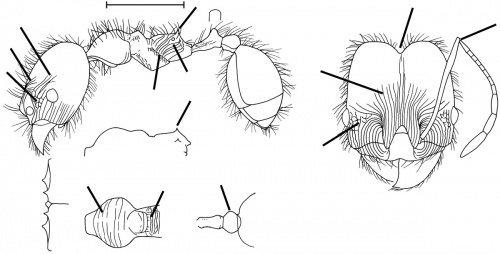 Named after Charles Kugler, in recognition of his research in myrmecology and his extraordinary collections of Pheidole made in Colombia and other parts of South America.