From Wilson (2003): P. lamia is a reclusive, soil-nesting species. Feener (1981) found that the species, which is seemingly rare because of its infrequent encounters with entomologists, is actually quite abundant at the type locality (Austin, Texas), at least in the secondary oak-hackenberry woodland of the Brackenridge Field Laboratory. In both Florida and Texas mature colonies each contain 500-1500 minor workers, and a much smaller number of major workers. Nests are constructed directly in soil beneath leaf litter, and thus are unusually difficult to find. Buren et al. (1977), studying Florida colonies in laboratory nests, found that the phragmotic majors use their bulldozer-like heads effectively in defense against marauding thief ants of the genus Solenopsis. At Austin, minor workers were observed foraging around the clock in warm weather (Feener 1981).

From Wilson (2003): DIAGNOSIS A typical member of the lamia group: the major has a phragmotic head, with the anterior portion incorporating the clypeus and mandibles flattened (truncated), and deep antennal scrobes. This species is easily distinguished from the other members of the lamia group (Pheidole colobopsis, Pheidole pelor, Pheidole truncula) by the very elongate head of the major and Sculpturing of its head, which consists exclusively of parallel longitudinal carinulae that extend almost all the way to the occiput; and by the reduction of the propodeal spine in the major and minor to denticles. 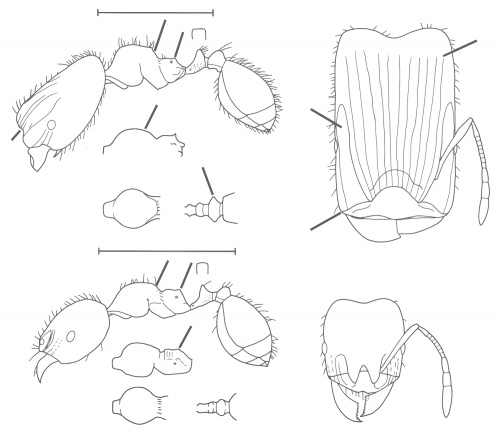 Gr lamia, a witch or monster that sucks blood, obviously an overstatement in reference to the bizarre head of the major. (Wilson 2003)