This species occurs in mature wet forest habitats. In Costa Rica it is common below 500m elevation but there are records to 1220m. Major and minor workers are common at baits and in Winkler samples. Nest are in soft rotten wood and under loose bark of rotting logs. The collection at MCZ contains several series from Colombia and one from Ecuador that closely match the morphology of Pheidole laselva. All of them are from montane areas, above 500m, instead of lowland rainforest like the Costa Rican population.(Longino 2009)

Widespread over the Atlantic lowlands and mid-Atlantic slopes of Costa Rica (Longino 1997). I have also seen material from Providencia and Valle, Colombia; Aragua, Venezuela; and Guayas, Ecuador. (Wilson 2003)

Stefan Cover has collected this species from soil nests. Winged reproductives have been found in nests at the La Selva Biological Station in January and March, and in Ecuador in late July. (Wilson 2003)

Major: carinulae on dorsal surface of head covering only half to two-thirds the anterior dorsal surface of the head; remainder of head, all of mesosoma, and dorsum of waist smooth and shiny; eye set well forward on head, so that the anterior margin is only about an Eye Length from the anterior genal margin; promesonotal profile a single smooth curve; propodeal spine small, equilaterally triangular; postpetiole from above elliptical, with angular lateral margins. 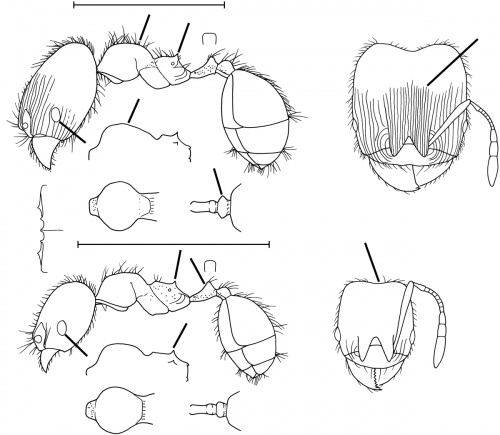 Named after the type locality.