An aggressive species that can form large colonies. Fischer and Fisher (2013): Pheidole megacephala – commonly also known as the ‘African big-headed ant’ – is a globally distributed invasive ant species and can be found on almost every island in the Malagasy region. This species is considered one of the most problematic invasive ant species and has caused devastating environmental problems all over the world (Hoffmann et al. 1999, Hoffmann & Parr 2008, Wetterer 2012). First described by Fabricius from the former ‘Ile de France’, called Mauritius today, the origins of this species remain unknown. Pheidole megacephala and the megacephala group are probably native to the Afrotropics (Wetterer 2012), although a Malagasy origin is also a possibility, as the whole group seems to be quite diverse in Madagascar.

Wilson (2003), in his description of the megacephala species group: The single species of this African complex known from the New World, megacephala, is a tropicopolitan tramp globally spread by human commerce. In the New World, it occurs spottily in disturbed habitats from southern Florida throughout the West Indies to Mexico, Central America, and South America as far as southern Brazil. Its affinities will be unknown until the African Pheidole fauna is better analyzed. If I were handed specimens and told they belonged to a species native to the New World, I would be inclined on the basis of superficial appearance to place megacephala in the tristis group--except for its possession of only 2 hypostomal teeth, unique postpetiole shape, and unicolonial, polygynous colony structure. A good formula for recognizing megacephala at a glance is: heart-shaped head, circular mesonotum, oval postpetiole.

Morphologically, both the minor and major workers of P. megacephala display relatively few diagnostic characters to set them apart from other members of the group. On the Comoros P. megacephala also occurs together with the two newly described species Pheidole decepticon and Pheidole megatron. The minor workers of the latter two species are very similar in morphometric measurements and external morphology to those of P. megacephala, and single major workers possess few clearly defined features that can be used for definite species identifications (also see the identification section of these other two species). Because P. megacephala is a morphologically variable species, series with several major workers are much more helpful for positive identifications. Especially the majors of P. megacephala and P. decepticon are in many characters almost identical and both vary significantly in their development of the typically heart-shaped head. The most apparent and stable differences, however, seem to be the amount of sculpture on the posterior half of the major worker’s head, the type and overall quantity of standing hairs on the meso- and metasoma, as well as the shape of the postpetiolar ventral processes. Further minor differences in the morphologies of P. decepticon suggest ongoing differentiation between populations on the islands where it occurs.

It is widespread in south and central Florida north to St. Augustine (St. Johns Co.), but sporadic, often occurring as a huge polydomous population, for example at the Selby Gardens in Sarasota County. In Hawaii this is the dominant ant in many habitats (Huddleston and Fluker 1968), with disastrous effects on the native arthropods, but in Florida it is a minor species. Pest status: where concentrations of this species occur, large groups of scavenging workers may invade buildings. First published Florida record: Smith 1933. (Deyrup, Davis & Cover, 2000.)

This ant is predaceous and scavenging, and may attend Homoptera for honey dew.

From Wilson (2003): The colonies, which are continuous, with no evident pheromone-based boundaries, and large numbers of fertile queens, are able to reach enormous size. In some areas, especially islands such as Madeira, Culebrita, and the Dry Tortugas, they form a virtually continuous supercolony that excludes most other ant species. They do best in relatively moist, disturbed habitats, thus thrive around human habitations and in cultivated land. Nest sites are highly variable, from within and beneath rotting logs and underneath rocks and sidewalk flagstones to the bark and trunk-based detritus of standing trees. Columns of foragers travel substantial distances from one nest site to another and to food sources. P. megacephala are aggressive toward other species, and war with populations of such locally dominant species as the Indo-Australian weaver ant Oecophylla smaragdina and the cosmopolitan Argentine ant Linepithema humile (= Iridomyrmex humilis). General accounts of this important species are given by Wilson (1971), Holldobler and Wilson (1990), and D. F. Williams et al. (1994). A bibliography of the ant for North America is provided by D. R. Smith (1979). The devastating effect on the native Hawaiian insect fauna was described by the pioneering entomologist R. C. L. Perkins (1913).

While this species nests most commonly outside, when found in buildings they occupy ceilings, wall cavities, power outlets and nearly any suitable space.

Bertelsmeier et al. (2015a, b) examined elements of interspecific aggression, and food resource discovery and dominance, between this species and several other highly invasive ants. In laboratory assays Pheidole megacephala was aggressive when confronted with workers of other invasive ants. Of the group of four species that were found to be aggressive, P. megacephala was the most adept at finding and recruiting to food in a laboratory arena experiment. It was also found to be the least effective aggressor of the group of four invasive ants examined.

Though identified from stray specimens (possibly in cargo) much earlier, the pest first made its presence known as a colonist in South Perth in 1942 (May and Heterick 2000). The ant now occupies much of the metropolitan area, and is probably assisting, along with the Argentine Ant (Linepithema humile), with the ongoing demise of Perth’s native ant fauna (Heterick et al. 2002). This pest can also be seen in many cities and towns throughout WA.

Deyrup, Davis & Cover (2000): Pheidole megacephala, like Linepithema humile, has been in Florida for a long time and is the dominant ant on a few sites. These two species appear to be mutually exclusive, and vie for supremacy in Bermuda (Haskins and Haskins 1965) and Hawaii (Reimer 1994). In Florida, P. megacephala occurs from Tampa through the Florida Keys, with one record from the coast of St. Johns Co. Its rarity in north Florida is probably due to cooler winter temperatures. We have no explanation why it is not a dominant species in tropical and subtropical parts of the state.

Le Breton et al. (2006) found pupae of this species in an Okinawa Island (southern Japan) population were parasitized by an undescribed Uropodidae mite species. The mite appeared to be a native species in the region hence is believed to have shifted its host choice after the arrival of P. megachepala. Ninety-two percent of the nests sampled (n=75) were infested with mites.

Fischer and Fisher (2013) - The types are presumed lost. No type specimens could be located in both of the two possible collections – the Zoological Museum of the University of Copenhagen (Zoologisk Museum, University of Copenhagen) and the Muséum National d'Histoire Naturelle in Paris (Musee National d'Histoire Naturelle). To stabilize the name P. megacephala we designated a neotype in this publication. The neotype, together with many associated specimens, was collected on Mauritius. The material is morphologically concordant with previous redescriptions (Wilson 2003, Eguchi 2008), and identical to P. megacephala material from other collection localities (e.g. Papua New Guinea and Australia).

Fischer and Fisher (2013) - Possibly as a result of its wide distribution and local abundances, a number of subspecies and synonyms have accumulated during the nineteenth and early twentieth century. Several of the subspecies are probably synonyms (unpublished data), and a number of described and undescribed related species add to the taxonomic confusion within the megacephala group.

Wilson (2003) - Major and minor: in side view, entire postpetiole oval in shape, with all of the ventral margin bulging in a conspicuous convexity, and the node oval, low, and weakly developed; mesonotal convexity absent, the promesonotal profile forming a nearly smooth semicircle; color brownish yellow. 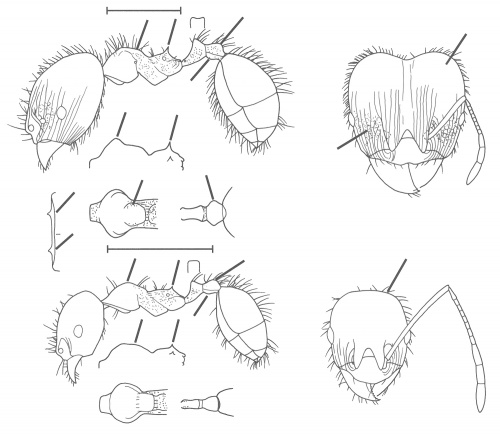 Other Resources and Articles